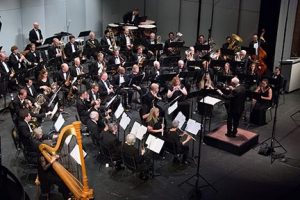 The Westchester Symphonic Winds (WSW) has, like all performing ensembles, been on hiatus during the COVID-19 pandemic. However, this award-winning ensemble has been active during the shut down. WSW has been making plans for the time when rehearsals can resume on the stage at Tarrytown Music Hall, where this award-winning community wind band is an ensemble-in residence.

The band has been meeting biweekly since March on the Zoom platform, to gather socially and support one another. As a part of the community outreach plan of its mission statement, Curt Ebersole, conductor/music director, formed a Band Directors Group forum on Zoom for member directors, and extended an open invitation to band directors in Westchester, Rockland, Fairfield, and New York City to join us to discuss all types of issues surrounding the music education community during this challenging time.

In order to reach out directly to our faithful audience members, and invite others to experience the best of American community band performance, WSW has planned a webinar in place of its annual Fall Concert, on Sunday, November 8 at 3:00 pm. This virtual meeting, “WSW – We’re Still Working,” will feature the plans the band has for the future, including our exciting commission project with composer Michael Markowski, who will be a featured guest during the webinar. Highlights of musical selections of future performances will be discussed. Testimonials from current members and past guest artists will also be prominent during this hour-long webinar.

The link for guests to join will be published on our main website, www.westchestersymphonicwinds.org, prior to the event. Everyone currently on our mailing list will also receive a direct invitation. You can also join the mailing list to receive the link by emailing us at [email protected].

The Westchester Symphonic Winds earned a first, a second, and a third place honor in the 2018-2019 American Prize competition. The American Prize (TAP) is our nation’s most comprehensive series of contests in the classical arts. These honors were announced as WSW began its 32nd season of performances in Westchester County last November. WSW placed First in the Band/Wind Ensemble category, Community division. Curt Ebersole, WSW conductor, placed Second in the Band/Wind Ensemble Conductor category, Community division. Finally, WSW placed Third in the Band/Wind Ensemble category, Community division for the Ernst Bacon Memorial Award, for the performance of an American composition; WSW earned this particular recognition for its performance of Brooklyn Bridge, by Michael Daugherty, with clarinet soloist Steve Cohen. This Win-Place-Show standing is a unique distinction of pride for the ensemble. As noted on their website, “The American Prize is nonprofit, unique in scope and structure, and is designed to evaluate, recognize and reward the best performers, ensembles and composers in the United States based on submitted recordings. There is no live competition. The American Prize has attracted hundreds of qualified contestants from all fifty states since its founding, has awarded more than $60,000 in prizes in all categories since 2010, and is presented annually in many areas of the performing arts.”

The 60-member band is made up of individuals dedicated to performing and sharing the concert band tradition with Westchester audiences, and includes music educators, doctors, lawyers, engineers, bankers, and professionals from diverse backgrounds. In residence at Tarrytown Music Hall, the Westchester Symphonic Winds has also performed for sold-out audiences in the Venetian Theater at the Caramoor Center for Music and the Arts in Katonah. The band was featured in a New York Times article in October 2015, as well as in Teaching Music, the official magazine of the National Association for Music Education.

Thirty-two years ago, this adult community band was founded to give Westchester area musicians the opportunity to relive the musical and social experience of playing in their high school concert band. Initially known as the Hudson Valley Wind Symphony, the group has grown to 60 wind and percussion players, and has found a permanent home at the Tarrytown Music Hall. The band has changed its name to the Westchester Symphonic Winds, to better reflect that its members are drawn from Westchester County and the surrounding tri-state metropolitan area. The Westchester Symphonic Winds exists to promote music in our area, instill pride in our nation and heritage, provide opportunities for personal expression and growth within our membership, and nurture the love of music by offering an exceptional musical experience for people of all ages.

The ensemble has profited from the leadership of its conductors. James D. Wayne conducted the band from 1988-2004. Dr. Luis Fernando Jimenez served as conductor from 2005-2008. Curt Ebersole was invited to conduct the 20th Anniversary Gala Concert in 2008, and was subsequently invited to stay on permanently as Conductor/Music Director. Over the years, we have given concerts on behalf of many service and benefit organizations. Our educational outreach program has included a Side-by-Side Concert with the Mahopac Central School District. Our Exchange Program with the Northshore Concert Band of Evanston, Illinois, provided opportunities to perform at Pick-Staiger Concert Hall at Northwestern University and the Palace Theatre in Stamford, Connecticut. Our Apprentice Conductor program gives music educators from within the group an opportunity to conduct the ensemble, with coaching and feedback from Maestro Ebersole. The ensemble has been the subject of articles in The New York Times and Teaching Music, the magazine of the National Association for Music Education.

Like many avocational groups, WSW members represent many backgrounds and vocations, but the common thread is the love of the concert band experience. Since a broad cross-section of the public has never heard a serious concert band, one of the aims of the group is to expose music lovers to this wonderful, vast repertoire. The organization is an Ensemble-in-Residence at the historic Tarrytown Music Hall in Tarrytown, New York, and rehearses there on Monday evenings from September through June.

Visit us at www.westchestersymphonicwinds.org for more information and personnel opportunities. We also maintain a presence on Facebook and Twitter (@WSWinds). Westchester Symphonic Winds, Inc. is a Section 501(c)(3) Not-for-Profit organization. Contributions, financial assistance, principal chair underwriting, and volunteers are essential to our success, and always welcomed.

Curt Ebersole has served as the Conductor/Music Director (John P. Paynter Memorial Chair) of the Westchester Symphonic Winds since 2008, fostering its exponential growth over the past twelve seasons. He led the Westchester Symphonic Winds in convention and exchange performances in New York City, Chicago, Poughkeepsie, Stamford, and Syracuse, and at six sold-out performances at the Caramoor Center for Music and the Arts. He retired from Northern Valley Regional High School (Old Tappan, NJ) in 2013 after serving as Director of Instrumental Music for 31 years, earning frequent critical accolades and establishing the Prism Concert as a local rite of spring. He is now a member of the Department of Performing Arts (Jane Rechtman Faculty Chair) at The Masters School, in Dobbs Ferry, NY. Maestro Ebersole has served as a guest conductor and clinician for numerous honor bands/orchestras and adult community ensembles across the nation, including performances at Carnegie Hall, Avery Fisher Hall, Symphony Space, University of Georgia, Syracuse University, Hartwick College, Georgia State University, and in Las Vegas, South Korea, and Australia. He is the founding coordinator of the Music Educators of Bergen County Wind Conducting Symposium. He was a clinician at the 2009 Midwest Clinic in Chicago, IL, the 2015 & 2016 Temple University Wind Conducting/Teaching Workshops in Philadelphia, PA, the 2018 Florida Music Educators Convention, and presented his TED Talk Framing Failure at TEDxOneonta in September 2017.