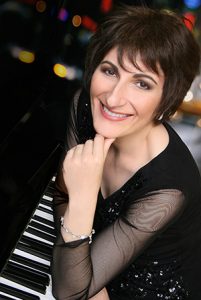 Hoff-Barthelson Music School’s Festival Orchestra is a full symphonic orchestra for high school students at the highest level of technical ability and musical artistry. Members participate in the New York Philharmonic Academy Jr. Program, which includes attending a rehearsal and post-rehearsal discussion at Lincoln Center and an evening of sectional coaching at the School by members of the Philharmonic. Lauded as one of the finest high school orchestras in the United States by the New York State Council on the Arts, the Festival Orchestra presents three concerts each year.

There is a suggested admission of $20. Students may attend free of charge.

About Hélène Jeanney:
Hélène Jeanney is a graduate of the Paris Conservatory with first prize in Piano and Chamber Music. Further study ensued at Indiana University with Gyorgy Sebok on a Fulbright Scholarship, where a few years later she became Professor Assistant to Menahem Pressler (of the Beaux Arts Trio). She holds a Professional Studies Degree from The Juilliard School and has studied and performed at the Mozarteum Academy in Salzburg, and the Banff Center of Fine Arts. She has worked with Germaine Mounier, Yevgeni Malinin, Gaby Casadesus, Nikita Magaloff, and Isaac Stern. As a recitalist, she has performed throughout Europe, Australia, and the United States, and has been a soloist with the Paris National Orchestra, the Cleveland Orchestra, and the Indianapolis Symphony. She is a faculty member at Hoff-Barthelson Music School and a regular guest coach for the Alaria Chamber Ensemble at the Mannes School of Music Extension Division.

Ms. Jeanney has received several top awards, including prizes in the Concours International d’Epinal, the Robert Casadesus Competition in Cleveland, The Thomas Richner Competition, The Chopin National Competition in Miami, and first prize in the East and West Artists.

About Jun Nakabayashi:
Music Director Jun Nakabayashi is the dynamic music director of the Hoff-Barthelson Festival Orchestra and the well-regarded Taconic Opera. Active in symphonic and operatic music for the past twenty-five years, he has conducted the Bay Shore Lyric Opera, the South Bay Chamber Ensemble, Vox Artis Zenei Festival 2002 in Hungary, and the Alea II Contemporary Music Ensemble. He is committed to his work with young musicians, and has taught and conducted at the Bay Area Summer Opera Theatre Institute at San Jose State University. He is a member of the Hoff-Barthelson Music School faculty.