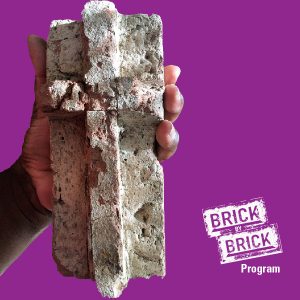 In 2005, Ginny Norfleet discovered an unusual brick while tearing down her house on Clinton Street in Haverstraw, NY. The brick would change her life, and the life of her community, forever. Join storytellers, singers of spirituals and gospel legends as they narrate the tale of the brick. This unforgettable musical journey will take you through the history of slavery, the brickyards and the African American church in Haverstraw. The event features the Haverstraw African American Connection and gospel greats, including Minister Angel Brooks Hill, Geneva Liz Welch, Kelly Waller Lawson and more. Part of ArtsWestchester’s Brick by Brick exhibition.

Minister Angel Brooks Hill – Minister Angel Brooks Hill is the youngest child of the late Dr. Victory “Vicky” Brooks. The anointed singer, pianist and songwriter of Gospel and Praise worship music discovered her gift of singing and playing the piano at the age of three. Her mother was known as the Queen of Gospel in Rockland County and all of her children were gifted with musical talent. The Brooks Family Singers are known throughout the state for their powerful voices and performances.  Brooks Hill since embarked on a solo career and has performed internationally and throughout the United States.

Geneva (Liz) Welch – Liz Welch was born into a family that has been singing gospel music throughout the tristate area for over one-hundred years. She is the eldest daughter of gospel great Hattie Lassiter and granddaughter of gospel legend Geneva Powell.  Welch grew up in the church hearing her mother and grandmother sing. As soon as she could talk, she too began to sing gospel. She continues her family legacy and electrifies audiences with her powerful voice.

Kelly Waller Lawson – Kelly Waller Lawson has been singing in local churches since the age of three and has since become known for her voice throughout the Rockland County gospel community. Her range and smooth voice attracts audiences and her solos have been requested by pastors and politicians. She continues to participate in several local choirs in Rockland County.

Lashana (Shana) Kee – Lashana Kee is a lifelong Haverstraw resident and the granddaughter of Deacon Buddy and Maggie Kee.  She is known for her infectious personality, warm smile and exotic hair styles. Kee has a love and passion for children and is a member of the Haverstraw African American Connection and the president of its kids group. Kee brings an energetic atmosphere to any event in which she participates.

Susan Filgueras – Susan Filgueras is on the executive board for the Haverstraw African American Connection (HAAC) and holds the position as local historian both there and at Stony Point.  Filgueras spends countless hours researching historical documents and locations in order to piece a hidden history together. No stone goes unturned as she looks to expose the true history of the brickyard worker and of the African American of Haverstraw. She has a wealth of information and she captures the attention of audiences of all ages, races and backgrounds.