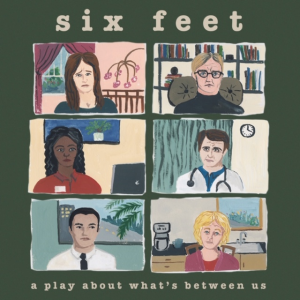 Doctor, caterer, therapist, lover. It’s been 217 days since the virus changed their lives. At 6 pm (Hawaii time) they’ll meet on ZOOM to discuss a tragic event that connects them all. But will this call tear them apart?
RIVERARTS has commissioned an original, innovative play to be performed live on ZOOM. Written and directed by Melanie Hoopes (Netflix’s Bloodline, Alec Baldwin’s Here’s the Thing), SIX FEET is full of tension, intimacy, and a cathartic, biting clarity. It’s a play about confronting emotions that are made more raw, volatile, and intense the more they are confined. It shows us what happens when we rely on flat, 2D interactions to communicate things that are so much bigger than the spaces we inhabit.
Written and Directed by Melanie Hoopes. Starring Jenny Bacon and family, Anitra Brooks, Kelly Coffield Park, Ed Herbstman, Stephen Park, Nick Wyman, and Jean Villepique and family. Original music by Steve Horelick. Audio/video technician, Josh Govier, will orchestrate a smooth and clear transmission of the performance.
For tickets and further information: riverarts.org/sixfeet

Jenny Bacon has brought characters to life alongside some of the masters of the American Theater, including Sam Shepard, Tony Kushner, Sarah Ruhl, Theresa Rebeck, Lisa Kron, and David Rabe. She has worked with groundbreaking directors Ivo van Hove, JoAnne Akalaitis, Daniel Aukin, Walter Bobbie, Robert Falls, Mary Zimmerman, Daniel Fish, and others, garnering awards across America and a Herald Angel Award from the Edinburgh Festival. She has appeared on American television playing a variety of unfortunate souls in horrific circumstances, and has had an absolutely wonderful time doing it.

A graduate of Brown University and The Integrative Sound and Music Institute, Anitra Brooks has toured the U.S. and world with Drama Desk Award-nominated puppet performers and masked musicians Big Nazo, Drama Desk Award-nominated “bad-ass masters of vocalogy” Hotmouth, and with Grisha Coleman’s dance and live music performance installation echo::system. In her 20+ years in New York City, she has performed at the Public Theater, Belasco Theater, LaMama, HERE Arts Center, Kraine Theater, Ohio Theatre, National Black Theatre, and other venues. She has also been featured in numerous television and radio commercials, television shows, and soap operas. As a recording artist, she has released two albums of original music: Flood in 2008 and I Walk in Your Light in 2015. She is the co-producer of the community ensemble project and play Where Are We Now?: Race, Pride, Class & Inequity, and teaches Music & Movement at the Greenwich Country Day School. She lives in Cos Cob, CT with her husband and sons. www.anitrabrooks.com

Kelly Coffield Park started her acting career in 1978 at the Emelin Theater in New Rochelle New York. She is thrilled to be back (virtually) in Westchester County! She is currently Zooming from Los Angeles, where her husband Stephen Park and she are holding down the fort for their kids in college. She is thrilled to be working with Melanie Hoopes again, after being part of Laurie Stanton’s Sound Diet.

Stephen Park was born in Brooklyn, NY to Korean immigrant parents. He began his career as a stand-up comedian in New York City and soon after started acting in the theater. His first film role was as the market owner in Do the Right Thing which led to his next role in Quick Change. Upon moving to Los Angeles, he became a cast member of the sketch comedy television series In Living Color during the 1991-1992 season where he met fellow cast member Kelly Coffield, who eventually became his wife. (And his castmate again in this show!) Stephen has been is such iconic movies as the Coen Brothers’ Fargo and A Serious Man, as well as Bong Joon-ho’s Snowpiercer. He is in Wes Anderson’s soon-to-be released movie The French Dispatch.

Jean Villepique left New Jersey to study theater and improvisation at Northwestern University. She stayed in Chicago, pursuing improv at the former ImprovOlympic theater, studying with Del Close, and then was hired by The Second City, Chicago. She wrote and performed in five reviews there before moving to New York. There she performed at the UCB and Magnet theaters before moving again to LA. TV/Film credits include The Office, 30 Rock, Sharp Objects, Better Call Saul, and Jean can currently be seen as Michelle Jones on AP Bio, streaming on the Peacock platform.

Nick Wyman is an award-winning actor who has acted in a dozen feature films and sixteen Broadway shows, most recently Network with Bryan Cranston. He was part of the original cast of The Phantom of the Opera, spent six years as Thenardier in Les Miserables, and performed in many other on-stage roles. Film credits include Die Hard With a Vengeance, Maid in Manhattan, and Planes, Trains and Automobiles. He has also appeared in television in Boardwalk Empire, VEEP, Elementary, and The Good Wife, among others. He served as President of Actors’ Equity for five years and his show-business how-to-book, Climbing Rejection Mountain was just published this summer.

Josh Govier is an audio video tech from Hastings-on-Hudson, NY. He has a strong passion for technology, the arts and all of the places that they intersect. He is a longstanding friend of RiverArts, first starting as a student, he has gone on to serve as a Videographer, Sound Recordist, and Music Tour Associate Producer.