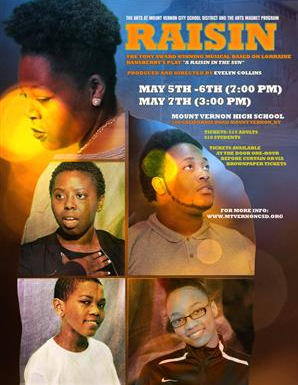 The  Arts at Mount Vernon City School District  and the Arts Magnet Program’s  musical production of  “Raisin” will take place Friday, May 5 and Saturday, May 6 at 7 p.m. and  Sunday, May 7 at 3 p.m. in the Mount Vernon High School auditorium.

The cast features students from Mount Vernon and Thornton high schools and the district’s Arts Magnet Program. In the lead roles are: Dionysia Placide, as Lena; Aaron Davis as Walter Lee; Danielle Franco as Ruth; Calilah Hines as Beneatha; and Armani Narcisse as Travis.

The musical, based on the stage play “A Raisin in the Sun” by Lorraine Hansberry, was nominated for nine Tony Awards in 1975, including Best Musical.

The storyline takes place in 1951 in Southside Chicago where an African-American family — Ruth Younger, her husband Walter Lee, their son Travis, Walter’s sister Beneatha and his mother Lena — are living in a cramped apartment.

Walter is a chauffeur but thinks that his deceased father’s life insurance policy will buy a way to a better life. Walter plans on buying a liquor store, but his mother is against the selling of alcohol. Tensions rise as Walter tries to convince Lena to forget her dream of buying the family its own small house and save his sister’s dream of becoming a doctor.

“Our cast and crew has been working for months to create a wonderful theatrical and musical experience for the community,” said Collins, who is the district’s director of arts and gifted and talented education.   “The talent of our students is beyond amazing.”

Tickets are $15 for adults and $10 for students. Tickets are available at the door one hour in advance of show time or via Brownpaper Tickets.
This is a matinee performance on Sunday, May 7 @ 3:00pm.