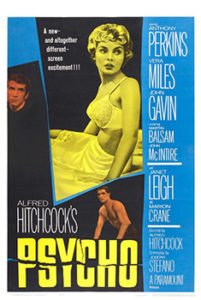 Marion Crane wants to make a new life for herself, so she flees hometown Phoenix with a stolen bag of cash from her employer. She then makes a fateful stop at the Bates Motel, run by one Norman Bates (Perkins), a nervous, awkward, but seemingly innocuous man. Marion learns too late he is anything but, and soon her sister Lila and Marion’s lover Sam Loomis have teamed up to discover what happened to her.

Made at the peak of his career in 1960, Psycho was suspense master Hitchcock’s last and most famous black-and-white picture — and a film that inaugurated the sub-genre of slasher movie. By the standards of today’s gore-fests, it’s a fairly restrained murder mystery; but it’s disturbing nonetheless, achieving its chills more by what is withheld than what is shown. Hitchcock knows just how to heighten our dread of who might be at the top of the stairs, or beyond that shower curtain. The terrifying “Psycho” stands above most any psychological thriller made since.

Join us for a series featuring outstanding classic films on select Tuesday evenings once a month. John Farr, Founder of the Playhouse and Editor of bestmoviesbyfarr.com, will introduce and give a short talk about each film before the lights go down. After screenings, guests are invited to join him for “Farr @The Bar” – drinks and casual conversation following the film at Bambi’s Bar in the Playhouse Cafe.