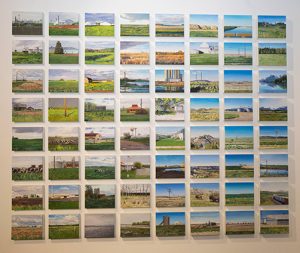 At a time when the pandemic has forced us to redefine tourism, Landscape Art and Virtual Travel: Highlights From the Collections of the HRM and Art Bridges celebrates artists’ striking ability to transport us to real and imaginary places. Experiencing nature—including through images—benefits us emotionally and physically, demonstrating just one of the ways in which art can have such a beneficial impact on our lives. The exhibition also demonstrates some of the ways in which Native Americans, African Americans, and other marginalized people have historically been denied ownership and connection to American soil.

American landscape paintings have always been intertwined with explorations of the great outdoors. In the mid-nineteenth century, many artists meditated on the sublimity of nature, whether gazing at the Hudson River’s Palisades or embarking on a far-ranging tour. Landscape painters brought distant places into the homes of their patrons and, popularized in books and prints, landscape art inspired a growing middle class to travel to these destinations. Artists continue to bring the world to us and send us out on our own adventures to this day. As a city-based museum overlooking the magnificent scenery of the lower Hudson River, we use our unique location as a lens to look more closely at people and their environments.

Landscape Art and Virtual Travel features two new loans from Art Bridges: Cynthia Daignault’s Light Atlas and David Hockney’s 15 Canvas Study of the Grand Canyon. Daignault’s “Light Atlas,” 2016, is an immersive, room-size work that consists of 360 small paintings documenting the perimeter of the continental United States. The work was inspired by the artist’s realization that she could name 100 men who roamed the country to create canonical works that have defined America, yet she could not name one such woman. Traversing more than 30,000 miles, across forests, deserts, mountains, and fields, Daignault traveled the road for a year. She stopped every twenty-seven miles to sketch and photograph the landscape.

At a moment when inequity is at the center of the American public discourse, Daignault wanted to assert her own rights to agency and opinion—to move freely through the country and to voice a comprehensive thesis on its identity. “Not just a room of one’s own anymore,” she explains, “but a whole world.” British artist David Hockney’s fascination with the idea of space and how we perceive it was part of what led him to follow in the footsteps of artists such as Hudson River School painter Thomas Moran, whose work is also featured in the exhibition. In the late 1990s, Hockney traveled to the American West to paint the Grand Canyon, leaving out himself and other visitors to let the viewer of his artwork connect with the vast unpopulated landform he depicted.

The exhibition ushers in the third year of our partnership with Art Bridges, which facilitates the sharing of outstanding works of American art and supports partner institutions in expanding and deepening their connection with audiences. These important loans offer rich potential for dialogue with nineteenth- to twenty-first-century paintings, prints, and sculpture from the Museum’s collection.

The works in the exhibition shed light on the power of art to influence ideas and actions and the process by which these precious lands might be protected and include works by nineteenth century Hudson River School painters Thomas Cole, Asher B. Durand, Thomas Moran, and Marie Louise Brevoort.  Several juxtapositions in the exhibition demonstrate the ways in which Native Americans and African Americans have historically been denied ownership and connection to American Contemporary photographer Jeremy Dennis, whose work is on loan to the Museum, documents scenic places on Long Island that are culturally important to him and the Shinnecock Indian Nation.

Works created by artists during the twentieth century represent modern takes on landscape. In Map of the Frenglish Kingdom of Novum Eboracum (New York) (We All Got To Have a Place We Call Home), Frohawk Two Feathers imagines an alternative colonial history of the Hudson Valley, which reminds us that the underlying message of many Hudson River School landscapes was a sense of White ownership. And incorporating materials found in nature as her canvas, Alison Moritsugu prompts us to explore the precarious relationship between humans and the environment. Richard Mayhew describes his paintings as “Moodscapes,” which do not represent actual locations, but are deeply informed by a sense of natural spaces and history born of Mayhew’s African American and Native American ancestry. The watercolor paintings by both Don Nice, Mt. Hook, and James McElhinney, Yonkers From State Line Park, reflect the artists’ deeply personal experiences of the Hudson River Valley. And Jordan Matter’s exuberant Vista updates the classic element of Hudson River School paintings of a figure on a journey, or paused in admiration of surrounding scenery, to transport us to the present spot on which his subject stands.