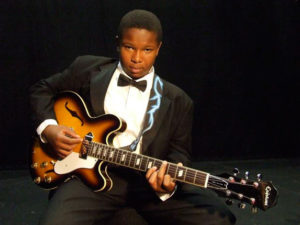 Solomon Hicks has been called ‘Lil’ B.B. King, ‘East’ Montgomery, and ‘King’ Solomon Hicks by his fans from NYC, nationally and now internationally.

He is the real deal…the next best thing out of New York City. Solomon is a jazz and blues guitarist, singer, and composer. An eclectic musician,

Solomon has been in the biz since age 13 as the lead guitarist and performer at the Cotton Club, with a 13-piece band. He recorded his first CD, Embryonic, at age 14 with the Cotton Club All-Star Band.

He has 2 CDs and has toured Europe and performed at national festivals. His latest CDCarrying on the Torch of the Blues has many original songs written, arranged and composed by Solomon. This includes a big band/swing anthem for the Cotton Club, “Jukin’ at the Cotton Club”.

From October 30 – November 3, 2015, Solomon opened for the band KISS on the KISS Kruise V from Miami to Jamaica.

Solomon teaches music theory, beginner guitar, and advanced guitar. He has taught music to children at the Children’s Aid Society.

PJS is thrilled to welcome ‘King’ Solomon Hicks back to our stage for another virtuoso Jazz Guitar concert!

PJS Jazz Society presents the best in jazz every Second Sunday at First Presbyterian Church, September through April. Most concerts start with a Young Musicians opening set from 5:15-6:00 pm, followed by two Headliner sets from 6:30-9:00 pm. Concerts are held in a cabaret setting. Additional parking available at the Holmes School (next to the First Presbyterian Church on Columbus Avenue). This performance made possible, in part, by ArtsWestchester with funds from Westchester County Government and its Board of Legislators.