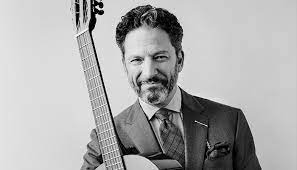 JOHN PIZZARELLI, the world-renowned guitarist and singer, has established himself as a prime contemporary interpreter of the Great American Songbook and beyond, with a repertoire that includes Joni Mitchell, Neil Young, Tom Waits, Antônio Carlos Jobim, and The Beatles. He has been hailed by The Boston Globe for “reinvigorating the Great American Songbook and re-popularizing jazz.” The Toronto Star pegged him as “the genial genius of the guitar.” And The Seattle Times saluted him as “a rare entertainer of the old school.”

Pizzarelli continues to expand the repertoire. In addition to the music of Nat King Cole, he has celebrated the work of composer Richard Rodgers with his GRAMMY Award-nominated With a Song in My Heart, toured the globe performing shows centered on Frank Sinatra, Johnny Mercer and John McCartney, bringing his unique style to a broad range of music and styles. His recordings range from torch ballads to classic swing, from bold originals to holiday fare, and the Fab Four.  His two-disc set, Live at Birdland, seamlessly blends James Taylor folk with Gershwin and Van Heusen standards, in addition to his own original compositions. He’s taken the music of Paul McCartney, Joni Mitchell, Neil Young, Tom Waits, and Antônio Carlos Jobim, marrying songs from great pop songwriters of his own generation with traditional jazz arrangements and melodies, in the effort to  communicate jazz to the non-jazz listener.

In addition to being a bandleader and solo performer, John has been a special guest on recordings for major pop names such as James Taylor, Natalie Cole, Kristin Chenoweth, Tom Wopat, Rickie Lee Jones and Dave Van Ronk, as well as leading jazz artists such as Rosemary Clooney, Ruby Braff, Johnny Frigo, Buddy DeFranco, Harry Allen and, of course, Bucky Pizzarelli.  In 1997, Pizzarelli made his Broadway debut in the musical Dream, a revue of Johnny Mercer songs. He led a 40-member live orchestra at Radio City Music Hall in Sinatra: His Voice, His World, His Way in 2003. Pizzarelli received the 2009 Ella Fitzgerald Award from the Montreal International Jazz Festival, joining a select group of past winners including Aretha Franklin, Tony Bennett and Harry Connick Jr.

John has performed on “The Tonight Show Starring Jimmy Fallon,” “Conan,” and “Great Performances” as well as “Leno” and “Letterman.” His themed shows, often performed with his wife Jessica Molaskey, suggest there is no limit to Pizzarelli’s imagination or talent. The New York Times called their recent “My Generation” show “brilliant.”