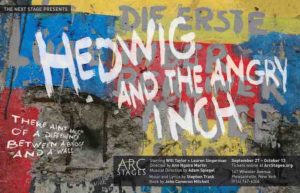 Hedwig and the Angry Inch by John Cameron Mitchell, at Arc Stages!
beginning September 27.
Pleasantville theater company Arc Stages presents Hedwig and the Angry Inch to kick off the fifth season for their professional company, the Next Stage. The Next Stage focuses on showcasing new, innovative work by a wide variety of exciting and talented writers. It is the third wing of a company that also includes a thriving Educational Stage and Community Stage.
Performances will be held at Arc Stages, located at 147 Wheeler Avenue in Pleasantville NY.
Friday, September 27 at 8pm
Saturday, September 28 at 8pm
Friday, October 4 at 8pm
Saturday, October 5 at 8pm
Sunday, October 6 at 2pm
Friday, October 11 at 8pm
Saturday, October 12 at 8pm
Tickets are $36 for adults, $28 for students/seniors. To purchase tickets, please visit www.arcstages.org or call 914-747-6206.
Hedwig and the Angry Inch will be directed by Ann Ngaire Martin and features Will Taylor* as Hedwig, and Lauren Singerman* as Yitzhak. The production will be musically directed by Adam Spiegel.
This award winning rock musical, with music & lyrics by Stephen Trask, tells the captivating story of Hedwig, a fourth-wall smashing genderqueer East German rock ’n’ roll goddess.
She weaves her tragically beautiful life story through a rock score and fearless monologues, aided by her band “The Angry Inch.” Hedwig’s tale of of love, longing, a botched sex change operation, revenge, and ultimately acceptance, is as relevant today as it was in its inception. Hedwig is sure to inspire anyone who has ever felt they’ve been given an inch when they deserved a mile.
About Arc Stages

Arc Stages is a multifaceted arts organization in Pleasantville, New York, which is composed of three theatre companies under one roof.

The Educational Stage: an educational theatre company where students of all ages (youth and adult) can explore the world of theatre through a professional rehearsal process, master classes, outreach and intensive ensemble work.
The Community Stage: a community theatre company for actors, singers and technicians from all walks of life that offers the best in American musicals and dramas.

The Next Stage: a professional theatre company that endeavors to produce high quality contemporary theatre as well as new works, cabaret, workshops and staged readings.

These three theatres, all under one roof, strive to better serve the community and its artistic needs. We are thrilled to be your artistic haven and look forward to creating more exciting, transformative theatre!