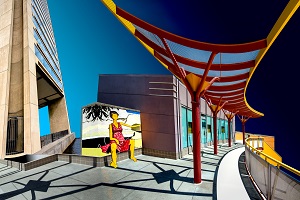 Exhibition is on display September 6 to October 1, 2022.
Gallery is open to the public during regular library hours.

Alan’s interest in digital photography grew as the hardware and software evolved into an integrated system capable of providing an almost unlimited control of photographic imagery. The resulting works are a composite of ultra high resolution photographs, taken throughout North America and Europe, extensively edited, reformatted, and “Re-Worlded”, to create what Alan calls “The Cameragenic Experience”. The finished work is a result of the joining of two very different endeavors, the outside world through an array of photographic imagery and the inside world of the “Digital Darkroom”, where extreme post processing occurs and anything is possible.
Alan sees his work as a deconstruction of the material world and a reconstruction of it into an abstract pseudo-environment that coaxes the mind into accepting the resulting image as an alternative reality and at the same time builds a framework of artistic validity. His imagery is highly detailed and rich in existential questioning.
Web Site: cameragenic.com
E-Mail: [email protected]

Alan is a long time Westchester resident. He met his wife, Annette, in the Bronx when he was 9 years old, and they were married 10 years later. Early on, his photography was mostly an attempt to fulfill a particular vision that might be described as surrealistic or psychedelic. These attempts were marginally successful and led to unsatisfactory conclusions.

When digital cameras and Photoshop came on the scene, it was a game changer. It opened the doors to a vast new landscape of visual possibilities. These new tools broadly enhanced the ability to do extreme editing which encouraged greater creativity.

Photography is mostly reality based, but, his work leans more toward contemporary art which for years has redefined the art world through continuous experimentation. He is self taught in computer visual arts and continually attempts to evolve in the field. Alan has exhibited in solo and group shows, in public spaces, galleries, and museums. He has mentored individuals in Photoshop and related computer applications.

Alan is currently retired from a long career in dentistry and continues to move forward, exploring an expanded range of photographic arts in the digital world.