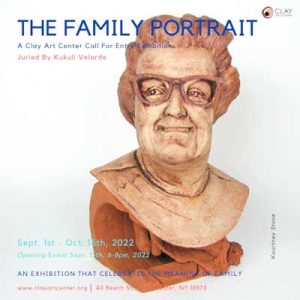 Join us for the opening reception on Thursday, September 15th from 6 – 8pm.

The Family Portrait explores the meaning and definition of the family unit in contemporary culture and society. Guest Juried by Kukuli Velarde, participating artists have responded to the theme by creating ceramic works that define what family means to them. The works presented explore the family unit in the broadest context that address and challenge traditional conceptions of what a family is, or could be.

This exhibition presents work from artists drawn from across the United States, and includes emerging and established ceramic artists. By using historical and cultural references in works that range from figurative to functional, and conceptual to playful, these artists invite us into a deeper conversation about the shifting landscape of the family unit.

“It is haunting to think about those who were here in the world before us. Who were those people who passed their DNA to us, and with it, gave us imprinted memories of their times, and the times in which their own ancestors lived?

There were a number of impossible-to-imagine acts of love, and also acts of violence, for us to become. What is a family portrait, if not a snapshot we choose to grab from a history of hundreds of years of survival, overcoming, and living; living with all our might and against all odds? A family portrait might not include blood related individuals, or even those with whom we share physical likeness. It could mean perhaps the physical rendering of a trait, which appears in the family tree as a legacy from our ancestors. It could be the sum of cultural elements of the place where we came from, or parents came from, or grandparents came from. It could be an object that symbolizes the combination of cultural roots. It could be a self-portrait depicting the cultural elements that we recognize in ourselves and that belong to our heritage. Who are we but the sum of many lives, many experiences, and many paths. Let’s think of the offspring that will come in a hundred years from your family tree; as her/his ancestor, what could you communicate about you, and the ones that preceded you?”

Kukuli Velarde is an internationally renowned Peruvian born artist, whose works address issues of gender, social and cultural identity and hierarchies, tradition and inheritance, investigated and interpreted through the reference of historical and religious imagery. Kukuli is the recipient of several major awards and grants including most recently, the John Simon Guggenheim Fellowship, New York, and the Grand Prize Gyeonggi International Ceramic Biennale, Icheon, South Korea. A BFA graduate of Hunter College, New York, her paintings and ceramics have been shown all over the world in both solo and group settings. Visit her website here.