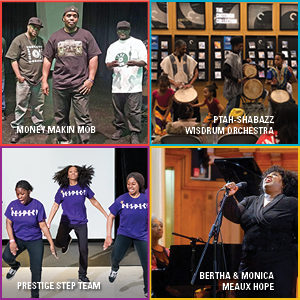 An Evening of Music, dance, and Conversation

For the full calendar of Fabulous February events, click here.

ABOUT THE ARTISTS and PERFORMERS

Bertha started playing piano at 3; Monica began singing at 10, and writing lyrics to a friend’s piano arrangements at 14.  Bertha provided helpful critique and a physical space for them to write undisturbed. Monica developed into a solid gospel and R&B singer, while Bertha traveled with her own jazz ensembles.  As Monica expanded her repertoire to include jazz, Bertha hired her to perform with her quintet at venues including the Beanrunner Café, Manna House Workshops, Shrine, National Black Theater, Lenox Lounge, Jazz 966, Medgar Evers Jazz Festival, Jazzmobile, International Women in Jazz Festival, and Bronx Music Heritage Center. At a private salon en duo, Bertha and Monica presented Full Circle, their first collaborative effort to include stories about their lives with their music performance.  Producer Cobi Narita suggested they expand the concept.  Encouraged, mother and daughter went into action and wrote an autobiographical play, Ashes From My Wings, for which they both wrote original songs.  Cobi Narita gave them her stage at Cobi’s Place in Manhattan.  Their performance was so well-received that 2 encore presentations were added. In 2015, Kennedy Center’s Artistic Director for Jazz, Jason Moran, invited Bertha to appear at New York’s Apollo Theater and Kennedy Center in Washington, D.C.  Most recently, Bertha completed a 2-1/2 year residency at Minton’s, was honored as a Legend of Jazz by The National Jazz Museum in Harlem, and as a Bronx Living Legend by the Bronx Music Heritage Center. Monica graduated cum laude from New York University in 2008, receiving a Humanities BA in Creative Writing.  Her well-reviewed one-woman show, Healing Fractures, was accepted for 3 performances in New York Theater Festival’s 2017 Winterfest.  She wrote twelve original songs for the play, and won Best Singer.  Monica, and her award winning director, Barbara Montgomery, are working together to mount the play in late spring of this year.

Awakened in honor of The Omniversal Creator, the wisdom of their Ancient Afrikan and Indigenous Ancestors, the sacrifice of The Ancestors of the Middle Passage, as well as the virtuous ideals preserved in lessons from bloodline Ancestors of respect and love for family, and principles of truth and right, Ptah-Shabazz Wisdrum Orchestra is the artistic collaboration of New York’s Patterson and Burrowes family ascendants,.  With endorsement of living family matriarch, Granny Dawn, the cultural legacy is renewed in the family’s living of the ancient Afrikan principles of Maat, Kwanzaa’s Nguzo Saba, and their performing of traditional West African djembe orchestra rhythms and dances.

Money Makin Mob is a hip-­hop family founded in Mt.  Vernon in 1978. For MMM, hip-hop is more than a hobby. Hip­-hop is a culture that the drew has been living and breathing since its earliest days in the 1970s.  As young adults MMM performed hundreds of shows all over Mt. Vernon, the  Bronx and the greater tri­state area. They have performed alongside some of  hip-­hop’s leading pioneers, including The Furious 5 and the Cold Crush  Brothers.  For the last 17 years, MMM has been organizing two annual grassroots  community hip­-hop events:  the Mount Vernon Hip­-Hop Community Summer  Cookout and the Old School Hip­-Hop Winter Party Concert. The mission of both events is to preserve the legacy of hip-hop, particularly hip-hop’s place in Mt. Vernon.

Prestige Step Team is an award winning high-school step team in New Rochelle, directed by Karen Johnson. The team has been competing since its formation over a decade ago.