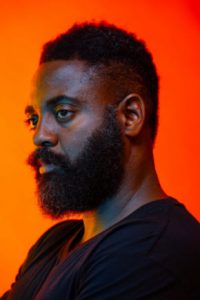 Join us on Zoom to celebrate the 10th annual Westchester Poetry Festival, co-sponsored with The Masters School in Dobbs Ferry, NY.

A recent collaboration with visual artist Titus Kaphar lead to The Redaction an exhibition of prints at MoMA PS1. Drawing inspiration and source material from lawsuits filed by the Civil Rights Corps (CRC) on behalf of people incarcerated because of an inability to pay court fines and fees, The Redaction features poetry by Betts in combination with Kaphar’s etched portraits of incarcerated individuals. Together, Betts’s poems and Kaphar’s printed portraits blend the voices of poet and artist with those of the plaintiffs and prosecutors, reclaiming these lost narratives and drawing attention to some of the many individuals whose lives have been impacted by mass incarceration.

A widely requested speaker, Betts often gives talks about his own experience, detailing his trek from incarceration to Yale Law School and the role that grit, perseverance and literature played in his success. In addition, he has given lectures on topics ranging from mass incarceration to contemporary poetry and the intersection of literature and advocacy. Betts has given commencement speeches at Quinnipiac University and Warren Wilson College and has lectured widely at universities and conferences, including Harvard Law School, Yale Law School, the University of Maryland, the Beyond the Bench conference, and a wide range of organizations across the country. Between his work in public defense, his years of advocacy, and Betts’s own experiences as a teenager in maximum security prisons uniquely position him to speak to the failures of the current criminal justice system and present encouraging ideas for change. That work has led Betts to be appointed by President Barack Obama to appoint him to the Coordinating Council of the Office of Juvenile Justice and Delinquency Prevention and more recently for Governor Ned Lamont of Connecticut to appoint him to the Criminal Justice Commission, the state body responsible for hiring prosecutors in Connecticut.

Named a 2018 Guggenheim Fellow and a 2018 NEA Fellow, Betts poetry has been long praised. His writing has generated national attention and earned him a Soros Justice Fellowship, a Radcliffe Fellowship, a Ruth Lily Fellowship, an NAACP Image Award, and New America Fellowship. Betts has been featured in The New York Times, The New Yorker, and the Washington Post, as well as being interviewed on NPR’s Fresh Air, The Travis Smiley Show and several other national shows. He holds a B.A. from the University of Maryland; an M.F.A. from Warren Wilson College, where he was a Holden Fellow; and, a J.D. from Yale Law School, where he was awarded the Israel H. Perez Prize for best student note or comment appearing in the Yale Law Journal. He is a Ph. D. in Law candidate at Yale and as a Liman Fellow, he spent a year representing clients in the New Haven Public Defender’s Office.

Leila Chatti, a Tunisian-American dual citizen, has lived in the United States, Tunisia, and Southern France. She is the author of the debut full-length collection Deluge (Copper Canyon Press, 2020), on the longlist for the 2021 PEN Open Book Award, and the chapbooks Ebb (New-Generation African Poets) and Tunsiya/Amrikiya, the 2017 Editors’ Selection from Bull City Press. She holds a B.A. from the Residential College in the Arts and Humanities at Michigan State University and an M.F.A. from North Carolina State University, where she was awarded the Academy of American Poets Prize. She is the recipient of grants from the NEA, the Barbara Deming Memorial Fund, and the Helene Wurlitzer Foundation of New Mexico, and fellowships and scholarships from the Fine Arts Work Center in Provincetown, the Wisconsin Institute for Creative Writing, the Tin House Writers’ Workshop, The Frost Place Conference on Poetry, the Key West Literary Seminars, Dickinson House, and Cleveland State University, where she was the inaugural Anisfield-Wolf Fellow in Writing and Publishing. Her poems have received prizes from Ploughshares’ Emerging Writer’s Contest, Narrative’s 30 Below Contest, the Gregory O’Donoghue International Poetry Prize, and the Pushcart Prize, among others, and appear in The New York Times Magazine, the Academy of American Poets’ Poem-a-Day, POETRY, Ploughshares, Tin House, American Poetry Review, Virginia Quarterly Review, The Georgia Review, New England Review, Kenyon Review Online, Narrative, The Rumpus, Best New Poets (2015 & 2017), and other journals and anthologies. In 2017, she was shortlisted for the Brunel International African Poetry Prize. She currently serves as the Consulting Poetry Editor at the Raleigh Review and teaches at the University of Wisconsin-Madison, where she is the Mendota Lecturer in Poetry.

Sean Singer  is the author of Discography (Yale University Press, 2002), winner of the Yale Series of Younger Poets Prize, and the Norma Farber First Book Award from the Poetry Society of America and a Fellowship from the National Endowment for the Arts; Honey & Smoke (Eyewear Publishing, 2015); and Today in the Taxi (forthcoming, Tupelo Press, 2022); and two chapbooks, Passport (Beard of Bees Press, 2007) and Keep Right on Playing Through the Mirror Over the Water (Beard of Bees Press, 2010). He has a BA in English with honors from Indiana University, Bloomington (1997), an MFA in Creative Writing from Washington University in St. Louis (1999), and a Ph.D. in American Studies from Rutgers-Newark (2013). He is the recipient of an Artist’s Grant from the Massachusetts Cultural Council and a Fellowship from the National Endowment for the Arts. His poems appear in many anthologies including A Face to Meet the Faces, Music’s Spell: Poems about Music and Musicians, Jazz Poems, and Callaloo: The Best of Callaloo Poetry. He was guest editor of Locuspoint: New York City. He has taught creative writing and a variety of interdisciplinary courses at Hunter College, SUNY Binghamton, Northern Arizona University, Barnard College, and Rutgers-Newark. He lives in Ossining, New York.