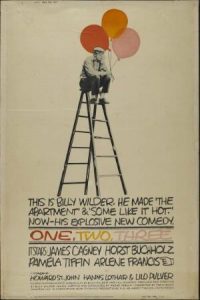 In the fourth collaboration between director Billy Wilder and screenwriter I.A.L. Diamond, Hungarian playwright Ferenc Molnár’s one-act play, Egy, kettö három is adapted into One, Two, Three, a fast-paced film that turned out to be one of Wilder’s more political comedies, if not the most political comedy of his career. The film stars James Cagney (Angels with Dirty Faces, White Heat) as C.R. MacNamara, a working-class cog that will do just about anything to get a promotion within the Coca-Cola corporation, including keeping an eye on his boss’s rebellious teenage daughter, Scarlett (Pamela Tiffin, who received a Golden Globe nomination for her performance in the film). When Scarlett comes to visit her father in Berlin, she drops the total bombshell that she wound up marrying a communist named Otto Piffl (Horst Buchholz, remembered best as Chico in John Sturges’s The Magnificent Seven). After hearing the news, a nervous C.R. fears that Otto’s political affiliation will clash with his boss’s own views, possibly jeopardizing his own promotion at Coca-Cola, and decides to run interference. Rumor has it that Cagney fought so much with Buchholz during the production, it’s what caused Cagney to drop out of acting for two decades.

Nominated for an Academy Award for Daniel Fapp’s cinematography.

This film is part of the Senior Afternoon Cinema series. Sponsored by: The Knolls—A Bethel Community