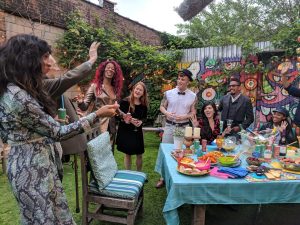 Join us for a program that explores ​the history of chosen families and their significance to LGBTQ communities. The evening will feature a talk about queer kinship by Sarah Lawrence Professor Dr. Mary A. Porter, a screening of award-winning Director/Producer Stephen Winter’s short documentary “One Stride: Chosen Family,” a talkback with Winter, and a special performance by the The LOFT’s Pride Chorus, an LGBTQ family of choice. The documentary “One Stride: Chosen Family” follows the stories of three sets of LGBTQ chosen families, including that of civil rights activist and trailblazer Richard Leitsch, former president of the Mattachine Society.

Tickets available at the door 30 minutes prior to showtime.

ArtsWestchester will also present Performing Families II: The Art of Runway and Step, an evening of dance and conversation with two award-winning families of choice. Saturday, May 4 at 7:30pm.

Stephen Winter is an award-winning filmmaker, writer and artist. His 1996 debut film Chocolate Babies premiered at theBerlin Film Festival and won awards at SXSW, Urbanworld and OutFest. In 2004, Winter co-directed the MIX NYC experimental queer film festival and produced Jonathan Caouette’s landmark documentary Tarnation, which premiered at Sundance and Cannes. Stephen has taught revolutionary cinema at Cornell University, Brooklyn College and Williams College. He received his MFA at NYU, and BFA at the Art Institute of Chicago.

Mary A. Porter, Ph.D., is a professor of Anthropology and Women’s History at Sarah Lawrence College. Her areas of research and teaching include kinship theory, postcolonial studies, feminist anthropology, queer anthropology, educational studies, and oral history. She has conducted ethnographic studies in the US, UK, and East Africa and has authored numerous articles on gender, kinship, education, and sexuality. Her most current work examines discourses of race, class, and kinship embedded in foster care and adoption. 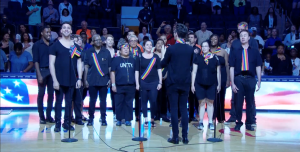 The LOFT’s Pride Chorus strives to reflect the diversity within LGBTQ communities.  Founded in 2017, the chorus is a blending of voices representing different sexual orientations, gender identities, ages, races, abilities and music/choral histories. The chorus is directed by White Plains resident Zack Wright. Wright holds a bachelor’s degree in Music Education with Choral Emphasis from the Schwob School of Music at Columbus State University.