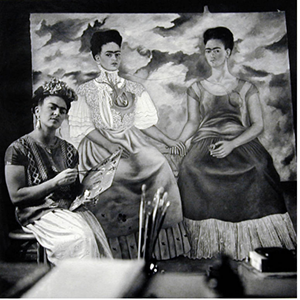 The Mexican painter Frida Kahlo (1907–1954) is widely admired around the world. There is an aura of mystique surrounding the artist, in which the story of her life is intertwined with the personal subject matter and surreal style of her paintings. A devastating bus accident at age eighteen left Kahlo with painful injuries that never completely healed, despite numerous surgeries throughout her life. Yet, the time spent in recovery led her to take up painting to express her experience of pain and loss. As a young, aspiring artist, she sought the counsel of famed Mexican muralist Diego Rivera, twenty years her senior, and they fell madly in love. Their complicated marriage included a great deal of admiration for each other’s art, but also numerous infidelities on both sides, divorce, remarriage, and emotional pain that added to Kahlo’s physical struggles and emerged powerfully in her paintings.

The persona of Kahlo is inextricable from her beloved Mexico and her relationship with Rivera. Frida Kahlo in Context explores this milieu, showcasing legendary photographs of Kahlo as well as artwork related to her personal life and Mexico. Fifteen photographic portraits capture her personality, fashion, and domestic life, including her relationship with Diego Rivera. The setting of several images is the couple’s cherished home, La Casa Azul (the Blue House), in Coyoacán, a municipality of Mexico City. Photographers include Florence Arquin, Lola Álvarez Bravo, Manuel Álvarez Bravo, Héctor García, Juan Guzmán, Fritz Henle, Bernice Kolko, Nickolas Muray, and Bernard Silberstein. Three vivid color portraits taken by Muray, who not only documented Kahlo but also became her friend and lover, inspired several of the artists featured in the concurrent exhibition, The World of Frida.

Kahlo and Rivera were deeply invested in Mexico’s cultural revitalization and respected the splendor and resilience of indigenous Mexican culture. Frida Kahlo in Context also includes nineteenth-century photographs and a 1930 painting by George Stengel that illustrate locations around Mexico City frequented by the artists, such as the Paseo de la Reforma, the Cathedral of Guadalupe, and the monastery at Churubusco. These images are complemented by five dance ensembles from Oaxaca, Mexico, the region of Kahlo’s maternal family. The costumes, lent by the Ballet Folklórico Mexicano de Nueva York, reflect the style Kahlo crafted for herself wearing similar traditional clothing.

Arriving as a special addition to the exhibition in March will be an important painting by Diego Rivera, La ofrenda (The Offering), on loan from Art Bridges. It depicts three people at an altar to honor the dead in a rainforest, paying tribute to the Mexican cultural tradition of Día de Muertos, (Day of the Dead).

The exhibition’s close look at Frida Kahlo and her surroundings enhances visitors’ appreciation of her life and art, but also helps us understand her powerful influence on the contemporary artists in The World of Frida.

The Hudson River Museum is grateful to Art Bridges, Throckmorton Fine Art, Jan and Warren Adelson, and the Ballet Folklorico Mexicano de Nueva York for loans to this exhibition.

Exhibitions are made possible by assistance provided by the County of Westchester.

The World of Frida and Frida Kahlo in Context are supported by the City of Yonkers, Mayor Mike Spano.