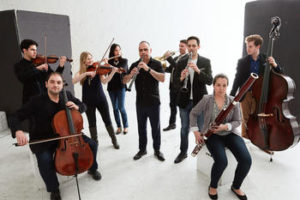 Frisson is explosive!  This fine ensemble of nine musicians showcases a myriad of rarely-performed masterworks.

Based in New York City, Frisson features the best and brightest of classical music’s rising stars drawn from many of the nation’s major music schools including Juilliard, Curtis, and Yale.  The group takes its name from a French word that means “shiver or thrill” or “a sudden burst of excitement.”  Frisson debuted during the 2017-18 season, which included an exciting performance for The Westchester Chamber Music Society that featured the Beethoven Septet.