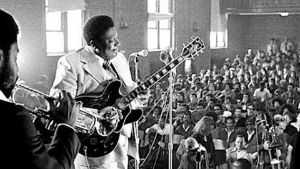 The director David Hoffman lived in Ossining, New York in the early 1970s and taught the inmates about filmmaking and storytelling. The state of New York and the Sing Sing prison wardens were open to the idea of the class and of the concert, which Hoffman proposed to take place on Thanksgiving Day.  Seven top-of-the-line documentary crews led by Hoffman filmed over a two-day period, in what turned out to be an extraordinary event both musically and in terms of what the inmates and the officers revealed about their experiences.

The resulting 90-minute film ran on prime time PBS and has not been seen publicly since that time.

We celebrate the 50th anniversary of this exceptional event with a screening of Sing Sing Thanksgiving followed by a Q&A with the director David Hoffman, moderated by Ryan Miller – and a reception in the Jane Peck Gallery.