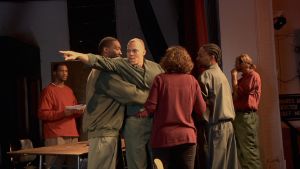 Q&A with Rehabilitation Through the Arts (RTA) alumni, followed by a reception in the Jane Peck Gallery

Dramatic Escape, a feature-length documentary, transports viewers into the lives of a group of incarcerated men at a maximum-security prison who are attempting to mount a behind-bars stage production of A Few Good Men at Sing Sing Correctional Facility in Ossining, New York. Tracing the journey from auditions through curtain call, viewers witness the development of these men as individuals and as an ensemble. Personal stories and candid accounts of the crimes that landed them in prison are interwoven with everyday struggles and philosophical considerations of the nature of redemption.

RTA helps people in prison develop critical life skills through the arts, modeling an approach to the justice system based on human dignity rather than punishment.

At this special screening and reception, we’ll be joined by nearly 20 men who were featured in the documentary and have since been released.

This film is presented in partnership with: Rehabilitation Through the Arts, with support from: Arts Westchester