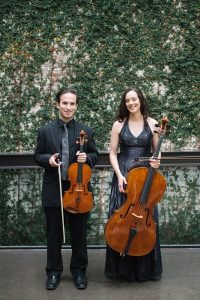 (White Plains, NY) The Music Conservatory of Westchester will ring in the new year with a concert by the Golden Williams Duo on Thursday, January 3rd at 7:30pm in the community music school’s Recital Hall. Cellist and Conservatory faculty member Diana Golden, and Assistant Principal Violist of the Hudson Valley Philharmonic Gregory K. Williams, will perform a program of duos for cello and viola.

This program will include works by composers Rebecca Clarke, Günter Raphael, Caroline Shaw, Paul Wiancko, Jessica Meyer, David Wolfson, and Michael Kosch. Because the twentieth century compositions by Clarke and Raphael are in two contrasting movements, the program was built around the concept of “contrasts.” Within this theme, Wolfson composed his Mood Swings for the Golden Williams Duo and Kosch dedicated two contrasting movements of his Sassetta to the Duo. In all, the concert will highlight compositions by five living composers.

The Golden Williams Duo first performed together in 2017 at the Custer Institute and Observatory in Southold, NY, as members of the Red Door Chamber Players. Most recently, the Golden Williams Duo has performed at the Mountain Springs Music Festival in Orem, Utah, and at the Bi-Annual Conference of the American Viola Society, held at The Colburn School in Los Angeles, California. Additional performances of this program will be held in Manhattan at the concert series of Metropolitan Playhouse and Castle Village, and the Aaron Copland School of Music at Queens College.

Composer Rebecca Clarke (1886–1979) was one of the finest violists and composers of her time. Holding both British and American citizenship, Clarke toured internationally with cellist May Mukle and other chamber musicians. Clarke would have won first prize in the 1919 Berkshire Festival of Chamber Music’s annual composition competition, but was awarded second prize instead when the judges discovered she was a woman. The Lullaby and Grotesque for Viola and Cello (published 1930) shows Clarke’s English musical influences and her Romantic and early twentieth century style.

Günter Raphael (1903–1960) was a skillful German-Jewish musician whose career was forever altered by the rise of the Nazi Party; he was removed from his posts in 1934, his works banned from public performance. Raphael was ultimately saved by tuberculosis: hidden from the authorities in morgues and sanitariums, Raphael was able to continue to compose in secret, but his music never received the recognition of similarly talented composers who were able to escape Germany or those who were born after World War II. The Duo for Viola and Violoncello, op. 47, no. 4 (1941) is dark in texture and mood, reflecting the turmoil that Raphael faced during this time.

According to New York-based composer Caroline Shaw (b. 1982), her limestone and felt “presents two kinds of surfaces – essentially hard and soft.” The sounds of pizzicato and canons are imagined to be alternately inside the eaves of a gothic chapel or a woolen hat. For Shaw, felt and limestone represents “two opposing ways we experience history and design our own present.”

American Haiku by Paul Wiancko (b. 1983) was commissioned by Ayane Kozasa and premiered in 2014. A richly-textured duo that incorporates Appalachian fiddling, percussive patterns and Japanese folk-inspired melodies, the piece explores Ayane’s background as a Japanese artist growing up in the United States as well as Paul’s Japanese-American heritage.

But Not Until by Bronx-based composer Jessica Meyer (b. 1974) is a duo based on a series of ironic interpersonal experiences that reminded the composer of the David Foster Wallace quote, “The truth will set you free. But not until it is finished with you.” It was written in 2014 for either viola and cello duo or viola duo.

David Wolfson (b. 1964) wrote Mood Swings for the Golden Williams Duo to premiere in December 2018. In addition to being inspired by a theme of contrasts, the title was also inspired by the idea of a musical dialogue that moves through different moods over time. Perhaps the composer was imagining the working relationship exhibited during rehearsals of duo partners who also happen to be married.

Dedicated to the Golden Williams Duo, Sassetta III and IV, by Michael Kosch (b. 1959), are musical responses to the work of the artist (known as Sassetta) Stefano di Giovanni’s “earthly eternity”: his astonishing portrayals of humans encountering the divine, experiences spanning the misery of despair to the ecstasy of revelation. The fifteenth century Sienese painter vividly captured the reality of mystery.