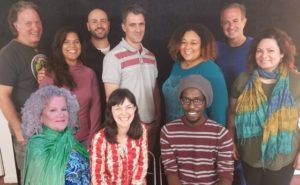 Fanciful, Provocative New Play Imagines What
Happened to Adam & Eve After their Eviction from Eden

Westchester, N.Y. – What on earth was God thinking when he put forbidden fruit in the Garden of Eden if he didn’t want Adam and Eve to eat it? Audiences attending the original play Back to the Garden soon will find out what was on God’s mind. Or at least what’s on the mind of award-winning playwright Albi Gorn, who has come up with his own fanciful answers, along with provocative questions worth pondering.

This imaginative, often humorous re-telling of Genesis by the Hastings-on-Hudson resident, featuring all local actors, has its Westchester premiere Nov. 1-17 at Axial Theatre in Pleasantville (N.Y.). It is co-produced by Axial and GoJo Clan Productions, the theater company of Mr. Gorn and Robin Anne Joseph, who is directing Back to the Garden.

Follow Adam and Eve as they are expelled from the Garden where they learn to fend for themselves in the Wilderness that lies beyond. When they encounter the sometimes bumbling and often volatile inhabitants of civilization’s dawn, they learn how to help these people in their struggle to survive, and discover the truth about God’s power—and their own.

Playwright Gorn says the idea for Back to the Garden was cultivated in the early 1990s, when he joined a women’s study group at Temple Beth Shalom in Hastings-on-Hudson, where his wife Robin Anne Joseph is cantor.

The purpose of the group, he says, was to interpret anew how women are depicted in the Bible. “I was the only man,” recalls Mr. Gorn, “and I was taken by how these extremely well-read women brought their own brilliant ideas to the stories of Eve, Lot’s Wife, Sarah and Miriam. From that, I crafted two songs and two plays. One of those plays is Back to the Garden.”

A special option for theater groups attending the show is to schedule a “Talkback” discussion with the writer, director, and cast after the performance, at no additional charge. It can be arranged by contacting [email protected]

Tickets can be purchased at BackToTheGarden.bpt.me for $25 adult, $20 seniors and students. For more information: GoJoClanProductions.com; AxialTheatre.org. Or email [email protected].

About the Author
Albi Gorn has been acting for more than 40 years and writing plays for the past 28. His work has been produced all over the United States, in England, and Mexico. He has won numerous playwriting contests and festivals. He is a member of the Dramatists Guild and, with wife Robin Anne Joseph, runs GoJo Clan Productions, a Westchester theater company for which he is the director of new play development. His plays, short stories, and original music are available at albigorn.com.

About the Director
Robin Anne Joseph has been acting, directing, and playwriting in the New York metro region for more than 45 years.  She has directed for many local theaters, including Axial Theatre, and for her and husband Albi Gorn’s own theater company, GoJo Clan Productions, where she is managing director and co-artistic director. For the past 39 years, she has served as cantor at Temple Beth Shalom in Hastings-on-Hudson.

GoJo Clan Productions, co-producer of Back to the Garden, is the theatrical production company of Albi Gorn and Robin Anne Joseph.  It presents professional productions of original and published plays at venues throughout the New York metro area. It views theater as a window into the heart and the soul.

Axial Theatre, co-producer of Back to the Garden, is an ensemble-based Westchester theatre organization comprised of artists committed to creating professional theatre and a vital educational experience for emerging artists. Axial Theatre produces plays, both new and old, that speak to issues relevant and resonant in today’s world.