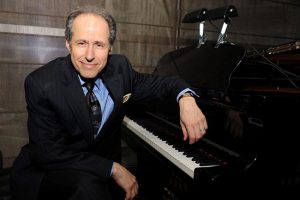 The Music of Our Time: A Sonic Road Map
Great Composers Lectures Series for adults with Michael Boriskin concludes on May 10th

Hoff-Barthelson Music School’s 2018-19 Great Composers Lecture Series for music aficionados presented by guest lecturer Michael Boriskin concludes on Friday, May 10, 2019, at 7:30 pm with The Music of Our Time: A Sonic Road Map.

Aaron Copland once wrote that art should reflect the era in which it was created. It has always been challenging to navigate through the art of one’s time, while actually living through its evolutionary twists and turns. But with the music of Stravinsky, Debussy, Bartok, Schoenberg, and other seminal composers now so far back in the rearview mirror of our artistic consciousness – like the works of so many writers, painters, architects, and choreographers of that bygone era, who exploded traditional artistic landscapes and ushered us into early 20th-Century Modernism – we can follow quite clear lines of artistic evolution and genealogy, and begin to make sense of it all and really revel in it! Noted pianist and NPR commentator Michael Boriskin invites all open ears and open minds on this musical adventure!

The lecture takes place at the School, 25 School Lane, Scarsdale. Admission is $25. HBMS students and parents may attend free of charge. Space is limited; reservations are strongly encouraged.

About Michael Boriskin:
Hailed by American Record Guide as “one of the most skilled and versatile musical artists of his generation,” internationally-acclaimed pianist Michael Boriskin has taken listeners in over 30 countries on provocative journeys across four centuries of music. From Berlin to Buenos Aires and Toronto to Tokyo, he has appeared at major concert halls and festivals, including the Kennedy Center, Carnegie Hall, Lincoln Center, Ravinia Festival, BBC in London, South West German Radio, Vienna’s Arnold Schoenberg Center, and Library of Congress.

He has performed as soloist with leading orchestras and as guest artist with countless chamber ensembles and has recorded extensively for SONY Classical, Naxos, New World, Bridge, and other American and European labels. He is a much-sought-after lecturer on both sides of the Atlantic, and is a familiar presence on National Public Radio as a performer, commentator, and host. He also served as Music Director of Mikhail Baryshnikov’s fabled White Oak Dance Project, and is a program advisor for the New York Philharmonic, Carnegie Hall, the U.S. Department of State, and many other preeminent institutions.