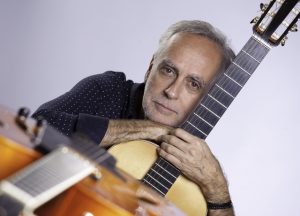 Born in Rio de Janeiro, Brazil, Sergio Pereira started playing acoustic guitar (violao) at the age of 8 years old, influenced by his older brother who played the guitar and helped him with his first chords. He was also influenced by the music of bossa-nova giants at the time such as Joao Gilberto, Tom Jobim, Carlos Lyra, Joao Donato, Marcos Valle and many more. Growing up in Rio in the 60’s and 70’s has contributed tremendously to the energy, groove and rhythms reflected in his music today.

Moving to New York in the 80’s motivated him not only to continue playing the guitar, but also to further enhance his knowledge of music and the guitar itself. He started to study with some of the jazz greats including Chuck Wayne, Sal Salvador, and Joe Carter. Since the beginning of the 90’s he has been travelling the world, playing with different bands and at various venues in many different countries in Europe, Africa and elsewhere.