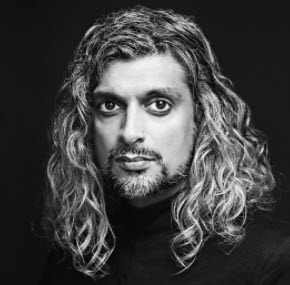 Please join us for this powerful reading, which will take place via Zoom. The Zoom link will be emailed immediately at the time of registration. (Please check spam / promotions folder for this email and email [email protected] with any questions.) This reading is free and open to the public, though we would be most appreciative of a donation.

Please register to get the Zoom link at

KAZIM ALI was born in the United Kingdom and has lived transnationally in the United States, Canada, India, France, and the Middle East. His books encompass multiple genres, includingthe volumes of poetry Inquisition, Sky Ward, winner of the Ohioana Book Award in Poetry; The Far Mosque, winner of Alice James Books’ New England/New York Award; The Fortieth Day; All One’s Blue; and the cross-genre texts Bright Felon and Wind Instrument. His novels include the recently published The Secret Room: A String Quartet and among his books of essays are the hybrid memoir Silver Road: Essays, Maps & Calligraphies and Fasting for Ramadan: Notes from a Spiritual Practice. He is also an accomplished translator (of Marguerite Duras, Sohrab Sepehri, Ananda Devi, Mahmoud Chokrollahi and others) and an editor of several anthologies and books of criticism. After a career in public policy and organizing, Ali taught at various colleges and universities, including Oberlin College, Davidson College, St. Mary’s College of California, and Naropa University. He is currently a Professor of Literature at the University of California, San Diego. His newest books are a volume of three long poems entitled The Voice of Sheila Chandra and a memoir of his Canadian childhood, Northern Light. Photo by Tanya Rosen Jones.

Jill Bialosky’s newest volume of poetry is Asylum: A Personal, Historical, Natural Inquiry in 103 Lyric Sections. She is the author of five acclaimed collections of poetry, three critically acclaimed novels, most recently, The Prize, and a two memoirs, Poetry Will Save Your Life and New York Times bestselling memoir History of a Suicide: My Sister’s Unfinished Life. Her poems and essays have appeared in The New Yorker, The Atlantic Monthly, Harper’s, O Magazine, The Kenyon Review, Harvard Review, and Paris Review among others. She co-edited with Helen Schulman the anthology, Wanting a Child. She is an Executive Editor and Vice President at W. W. Norton & Company. In 2014 she was honored by the Poetry Society of America for her distinguished contribution to poetry.

Mark Wunderlich was born in Winona, Minnesota and grew up in rural Fountain City, Wisconsin. He attended Concordia College’s Institut für Deutsche Studien, and later the University of Wisconsin from which he received a BA in German Literature and English. Wunderlich earned a Master of Fine Arts from Columbia University’s School of the Arts Writing Division where he studied poetry with J.D. McClatchy, William Matthews and Lucie Brock-Broido, among others, and translation with William Weaver and Frank MacShane.

Wunderlich’s first book, The Anchorage, was published in 1999 by the University of Massachusetts Press, and received the Lambda Literary Award. His second book, Voluntary Servitude, was published by Graywolf Press in 2004. A third volume of poems titled The Earth Avails, was published in 2014 and received the 2015 Rilke Prize from the University of North Texas and was a finalist for the Kingsley Tufts Award. He has published individual poems in The Nation, The New Republic, The New Yorker, The Believer, The Paris Review, Slate, Yale Review, The New York Times Magazine and elsewhere. His work has been included in over forty anthologies and has been featured on NPR’s All Things Considered. His work has been translated into Italian, Bulgarian, Spanish, German, Turkish and Swedish.

Since 2003 he has been a member of the Literature Faculty at Bennington College in Vermont, and where he become the first director of Poetry at Bennington, which is the college’s endowed series of brief residencies by visiting poets. In 2017 he was appointed the Director of the Bennington Writing Seminars graduate writing program. Wunderlich has taught in the graduate writing programs at Columbia University, Sarah Lawrence College, Ohio University and San Francisco State University. He has taught undergraduate writing and literature courses at Stanford University, Barnard College and Stonehill College.

Wunderlich is the recipient of a Wallace Stegner Fellowship from Stanford University, two fellowships from the Fine Arts Work Center in Provincetown, as well as fellowships from the National Endowment for the Arts, the Massachusetts Cultural Council and the Amy Lowell Trust. He is also the recipient of Writers at Work Award, the Jack Kerouac Prize, and a fellowships from the Bread Loaf Writers Conference and the MacDowell Colony. In 2012 he received an Editor’s Prize from the Missouri Review and was also selected for a residency at the Arteles Creativity Center in Hämeenkyrö, Finland. In 2014 he was a fellow at the Civitella Ranieri Foundation, and in 2017 he was the spring Writer in Residence at the James Merrill House in Stonington, Connecticut. Wunderlich lives in a 300 year old stone house in New York’s Hudson Valley near the village of Catskill.