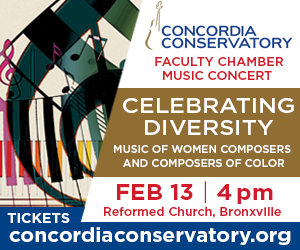 SUNDAY, FEBRUARY 13 AT 4 PM AT THE REFORMED CHURCH

Tickets are $25 for adults and $15 for seniors and children. To purchase tickets, visit www.concordiaconservatory.org or call 914-395-4507.

To ensure our Conservatory patrons and performers health and security, proof of full vaccination against COVID-19 is required by everyone attending over the age of 12 and masks are required by all attendees.

About the Faculty
Sun Young Chang, soprano, has worked extensively both teaching voice and piano and performing for over two decades. She received her Master of Music and Professional Studies Diploma from Mannes College of Music, The New School for Music. She was recently featured as a soloist in Riverside Opera Concert Series where she performed a role of Mimi in La Boheme.

As an active educator, Sun Young has been on the faculty at Concordia Conservatory at Concordia College, Berkshire Choral International, Kean University, and Westerhoff School of Music and Art after she completed the internship program with Metropolitan Opera Guild Education Department. Her students won numerous competitions including Crescendo International Competition, Rondo Competition, Royal Conservatory exams and performed at Carnegie Hall.

A performer on bassoon with numerous orchestras, chamber groups, opera companies, and

contemporary music ensembles, Keith Kreindler is a founding member of the woodwind ensemble TABOR and a member of Double Entendre Music Ensemble. He has made appearances with the SEM Ensemble, Quintet of the Americas, Symphony in C, the Monadnock Music Festival, was a featured performer at the National Computer Music Conference, and was one of Vince Giordano’s Nighthawks …for a night. Also a saxophonist and clarinetist, his woodwind doubling has brought him to the pits of dozens of musicals on and off Broadway.

Keith is currently the Director of the College of Mount Saint Vincent Conservatory, and is in his 13th year of teaching woodwinds and theory at Concordia Conservatory. Keith received his MM from the Mannes College of Music and his BM from the Aaron Copland School of Music; he also holds a BA in Art from Binghamton University and moonlights as a freelance graphic designer.

The New York Times describes pianist David Friend as “[one] of the finest, busiest pianists active in New York’s contemporary-classical scene.” With primary focuses on chamber music and contemporary repertoire, he performs regularly in the U.S. and abroad at major venues and festivals such as Carnegie Hall, Lincoln Center Festival, Royal Festival Hall (London), CTM Festival (Berlin), the Chan Centre (Vancouver), and the National Centre for the Performing Arts (Beijing). He is a member of an eclectic array of groups including Bent Duo, Grand Band piano sextet, TRANSIT New Music, and Ensemble Signal, and he performs duo recitals with celebrated American Quartet violinist Laurie Carney as the Palisades Duo. In addition to his core performing projects, he is a frequent guest artist with noted ensembles including Bang on a Can All-Stars, Alarm Will Sound, American Composers Orchestra, and International Contemporary Ensemble.

He has recorded for a wide variety of labels and is featured on Third Coast Percussion’s album of music by Steve Reich, which won the Grammy Award for best chamber music performance. Post-, his forthcoming album on New Amsterdam Records for solo piano and electronic processing, will be released in March 2022.