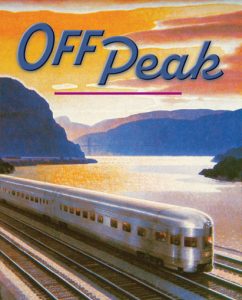 HUDSON STAGE is transferring the world premiere of its crowd-pleasing production of OFF PEAK to Off Broadway at 59e59th in NYC for a perfect holiday gift. November 26-December 23rd. The play was originally commissioned by HSC and performed in spring of 2022. Written by BRENDA WITHERS, directed by JESS CHAYES, starring KURT RHOADS and NANCE WILLIAMSON and featuring the voice of DOUG BALLARD.   Denise Bessette, Executive Producer; Anna Giacalone, Associate Producer.

When Martin (Kurt Rhoads) and Sarita (Nance Williamson), two old flames, run into each other on the evening commute, different views of the same past threaten to derail their connection.  A delightful new play about forgiving, forgetting, and the healing power of a good delay.

See this remarkable husband-and wife team, the stars of Hudson Valley Shakespeare. Also featuring Doug Ballard as the voice of the conductor. Of note: Kurt and Nance both live in Garrison, Doug lives in Montrose, the playwright, Brenda, lives in Irvington, the director, Jess,  is from Scarsdale, Anna, associate producer, lives in New Rochelle and Denise, the executive producer and founder of Hudson Stage, lives in Cortlandt Manor.  And, in case there’s any confusion, this is indeed, Hudson Stage’s last production after 24 years of offering top-calibre professional plays. 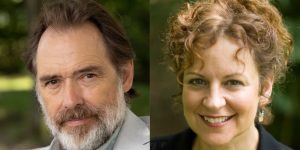 NANCE WILLIAMSON (Sarita) is thrilled to ride the rails again with Kurt in Off Peak having performed in the world premier production at Hudson Stage. Nance has been a professional actress for thirty-eight years performing in theater, television, film.  Most recently she can be seen in the movie The Hating Game.  On TV Nance can be seen in The Walking Dead-The World Beyond, The Good Wife and all the Law and Orders. On Broadway, Nance played in Cyrano, Romeo and Juliet, Henry IV, Broken Glass. Off-Broadway, Nance has performed in Cyrano, Pride and Prejudice, A Midsummer Night’s Dream, Marvin’s Room, Two Gentleman of Verona for the New York Shakespeare Festival, An Empty Plate at the Cafe du Grand Boeuf and The Seagull among others.   Locally, Nance and her husband, Kurt Rhoads have been members of the Hudson Valley Shakespeare Festival for over 20 summer seasons where her favorite roles include Martha Washington in The Most Lamentably Spectacular Trial of Miz Martha Washington,  Tamora in TITUS ANDRONICUS, Kate in The Taming of The Shrew, Cleopatra on Antony and Cleopatra, Lady M, The Nurse, Mrs. Malaprop and most recently Juliet.This is the 70th production Nance and Kurt have performed together. 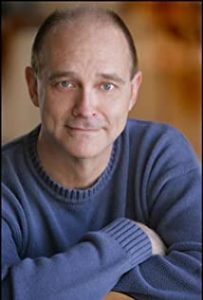 DOUG BALLARD (Voice of Conductor) Doug’s film roles include The Dark Knight,  The Big I Am, The Agency, The Descent II,  Fearless, Free Willy 2,  Sunset Grill, and The Gift . TV series regulars on Oh Baby for Lifetime, Past Imperfect for ABC, and Lucky for FOX. Guest appearances on Seinfeld, The O.C., The Practice, West Wing, Will And Grace, Northern Exposure, Larry Sanders, Malcolm In The Middle and many others. Theatrical credits include Prospero in The Tempest  at Dallas Shakespeare, Actor Lawyer  at The Goodspeed, God Of Carnage at Hudson Stage, Bait and Switch  at The Westbank, Christmas Carol  at Birmingham Theatre, and The Romantics  at NYTE. As a Musical Theatre Guild member Doug performed in The Baker’s Wife, Saturday Night, Take Me Along, and Empire.  As an Interact Theatre Company member he’s had roles in Counsellor-At-Law with John Rubinstein, And A Nightingale Sang, Manège A Trois Molière, Into The Woods, and Splitsville  by Richard Dresser.

JESS CHAYES (Director) was an inaugural member of the BOLD Theater Women’s Leadership Circle at Northern Stage and is a founding co-artistic director of The Assembly. Recent productions include: The Antelope Party (Dutch Kills),  Jane Anger (Jen Campos Productions), Jordan & Venus Rising (Northern Stage), as well as new work development with the New Group, Playwrights Horizons, and Clubbed Thumb. Jess is a NYTW Usual Suspect and a co-founder of the New Georges Jam. Recipient of the Lucille Lortel Award from the League of Professional Theatre Women and the Collaboration Award from the Women in the Arts & Media Coalition.

BRENDA WITHERS (Playwright) is a writer, actor, and co-founder of the Harbor Stage Company. She’s so happy to reunite with frequent collaborators Hudson Stage (Almost, Maine, Other Desert Cities) and Jess Chayes, who directed the premieres of her plays Jordan and The Lodger (Northern Stage). Her work (The Ding Dongs, Northside Hollow, Matt & Ben) has been produced at places like Portland Stage (Clauder Prize), Two River, Urbanite Theatre, and Amphibian Stage. Recent onstage credits include the Guthrie, A.R.T, and McCarter Theatre. She’s a Huntington Playwriting Fellow, a graduate of Dartmouth College, and a member of the BMI Musical Theatre Workshop.

This production was originally produced by Denise Bessette and Olivia Sklar at Whippoorwill Theatre, North Castle Public Library, Armonk, NY.  It was made possible, in part, by funds from ArtsWestchester and Westchester County Government, George Latimer, County Supervisor.