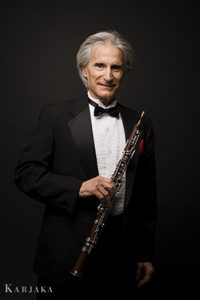 There is a suggested admission of $20. Students may attend free of charge.

About the Festival Orchestra:
Lauded as one of the finest high school orchestras in the United States by the New York State Council on the Arts, Hoff-Barthelson’s Festival Orchestra is a full symphonic orchestra for high school students at the highest level of technical ability and musical artistry. The Festival Orchestra, under the direction of Jun Nakabayashi, performs three concerts annually; two are with guest artists of international stature in full-length concerto performances. Members of the Orchestra also participate in sectional coachings with members of the New York Philharmonic at the School.

About Gerard Reuter:
Gerard Reuter began his oboe studies at the Juilliard School at the age of nine and continued there as a pupil of Lois Wann. He attended the Royal College of Music, studying with Terrence MacDonagh and Michael Winfield. Mr. Reuter is a favorite at summer music festivals such as Caramoor and Marlboro and has toured Europe and the United States with the Orpheus Chamber Orchestra. He has been principal oboist of American Ballet Theatre, An die Musik, Parnassus, and the New York Philomusica. As the recipient of the 1992 Pro Musicis International Award, Mr. Reuter was presented in solo recitals in New York, Boston, Washington D.C., Los Angeles, Rome, Hong Kong, and Paris. He has been a member of the Dorian Wind Quintet since 1980.

About Jun Nakabayashi:
Jun Nakabayashi is the dynamic music director of the Hoff-Barthelson Festival Orchestra and the well-regarded Taconic Opera. Active in symphonic and operatic music for over twenty-five years, he has conducted the Bay Shore Lyric Opera, the South Bay Chamber Ensemble, Vox Artis Zenei Festival 2002 in Hungary, and the Alea II Contemporary Music Ensemble. He is committed to his work with young musicians, and has taught and conducted at the Bay Area Summer Opera Theatre Institute at San Jose State University.