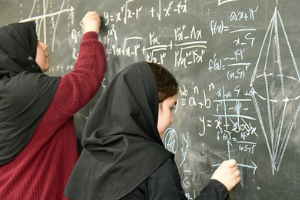 We are thrilled to offer this inspiring film and panel for free! Maryam Mirzakhani was the remarkable mathematician who, in 2014, became only the first woman—and first Iranian—to receive the Fields Medal, often regarded as the Nobel Prize of mathematics.  But more than just a giant milestone. Mirzakhani’s journey was unusual, and her particular mathematical vision was visually striking, lending itself to a wonderful use of animation in this film that chronicles both her life and ideas.  It’s a story that’s both uplifting and touching, as Mirzakhani was struck down by cancer in 2017 at the prime of her career, just 40 years old.

We have been lucky over these past years to host a number of very successful programs about mathematics at the Burns, with many famous mathematicians in attendance.  While this program will be virtual, we are thrilled to host a conversation with Mirzakhani’s colleagues moderated by David Eisenbud, the director of the Mathematical Sciences Research Institute (MSRI), as well as the film’s director, George Csicsery.

The film will only be available to stream on Sunday, April 25 at 7:00 pm in the JBFC Virtual Marquee, and will be followed by a panel discussion at 8:10 pm on the JBFC YouTube Channel.