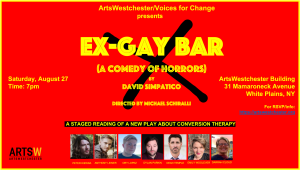 Ex-Gay Bar (A Comedy of Horrors)

As part of ArtsWestchester’ s Voices for Change initiative, ArtsWestchester is proud to present a staged reading of David Simpatico’s new play about conversion therapy.  “Ex-Gay Bar” is a two-act comedy/drama performed by six actors. The play explores the unregulated, multi-billion dollar gay conversion therapy/torture industry. Each actor portrays multiple parts as the story bounces between a sports bar for the ex-gay crowd, and a brutal gay conversion prison camp in Central America. Simpatico’s work deals with urgent, life-and-death issues, clothed in comedy. His use humor as a safety net for the audience helps to explore the dark underbelly of life. Humor sustains us and enables us to venture into the darkness. Humor can also be a slap across the face, to wake up the audience to issues they have been ignoring. This reading is directed by Michael Schiralli.

DAVID SIMPATICO is a playwright, librettist and performance artist whose work has been presented at major theatres around the globe, including London’s Hammersmith Apollo, Lincoln Center, Williamstown Theatre Festival, and the New York Shakespeare Festival. Career highlights include: the stage adaptation of High School Musical (Disney Theatricals;) the grand opera, The Life and Death(s) of Alan Turing (Justine Chen, composer;) the music drama, The Screams of Kitty Genovese (Will Todd, composer;) and the libretto for Pulitzer Prize-winner Aaron J. Kernis’ choral symphony, Garden of Light, commissioned by Michael Eisner and The Disney Company (NY Philharmonic, conducted by Kurt Masur).

Currently adapting Robert Bloch’s That Hell-Bound Train as a jazz opera with composer Lisa DeSpain, David is also finishing Rose of Sharon, a concept album about the end of the world (Heather Christian, composer and co-lyricist.) Three new non-musical plays are currently being shopped around: X-Gay Bar, Wilde About Whitman, and Waiting for the Ball to Drop. David recently earned his MFA in Creative Writing from the MountainView Writers at Southern New Hampshire University. He is an alumnus of the CLDP at American Lyric Theater, and a graduate of Northwestern University. Along with playwright Darrah Cloud, he runs Howl Playwrights, in Rhinebeck, NY where he lives with his husband, Robert and his dog, Elmo.