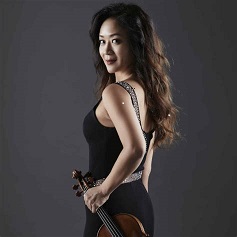 Violinist Chee-Yun has has dazzled audiences on five continents with her superb technique and unique artistry.  She is joined by pianist Henry Kramer for this special program of works by Sarasate, Strauss, Kreisler and others.  With Bob Sherman, narrator.

A winner of the Young Concert Artists International Auditions and a recipient of the Avery Fisher Career Grant, violinist Chee-Yun has performed with many of the world’s foremost orchestras and conductors. Orchestral highlights include her tours of the United States with the San Francisco Symphony under Michael Tilson Thomas and Japan with the NHK Symphony, a concert with the Seoul Philharmonic conducted by Myung-Whun Chung that was broadcast on national television, and a benefit for UNESCO with the Orchestra of St. Luke’s at Avery Fisher Hall.

Praised by The New York Times for “thrilling [and] triumphant” performances, pianist Henry Kramer garners admiration for his stylish programming and insightful, exuberant interpretations.  Kramer has soloed in concertos with the Bilkent Symphony Orchestra, Belgian National Orchestra, Shanghai Philharmonic Orchestra, and the Calgary Philharmonic Orchestra, among many others. A sought-after collaborator, he has appeared in recitals at the Chamber Music Society of Lincoln Center, the Mainly Mozart Festival, the Mostly Mozart Festival.

This concert is made possible, in part, with a gift in memory of Adrianne Reilly.