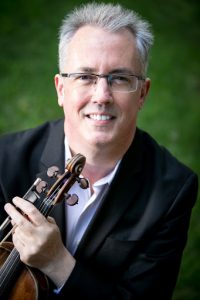 The Westchester Philharmonic String Quartet, with Robert Chausow and Martin Agee, violins; Michael Roth, viola; and Eugene Moye, cello, will treat us to special concert in our continuing partnership with the Phil. The program features Haydn’s String Quartet in D Minor, Op. 76, No. 2 “Quinten,” and Dvořák’s String Quartet No. 12, “American.”

Robert Chausow, Concertmaster and solo violinist of Westchester Philharmonic, has been a vital member of New York’s musical world for over three decades, performing with most of the finest ensembles in virtually all venues. He is also currently the Assistant Concertmaster of both American Composers Orchestra and Mostly Mozart Festival Orchestra, and Associate Concertmaster of New York City Ballet Orchestra. Violinist Martin Agee, a member of the Westchester Philharmonic for fifteen years, has served as principal violinist for the New York Chamber Symphony, the Orchestra of St. Luke’s, the American Symphony Orchestra, and the Mostly Mozart Festival Orchestra at Lincoln Center, among others.  His television, recording and performing credits include performances Itzhak Perlman, James Levine, Madonna and Metallica.   Michael Roth is currently associate concertmaster of the New York City Ballet Orchestra and has appeared in chamber music and as a soloist with the company.  A member of the Mostly Mozart Festival Orchestra, he is also Principal 2nd violin of the Westchester Philharmonic.  As a chamber musician, Mr. Roth has collaborated on violin and viola with artists such as Eugene Drucker, Menahem Pressler, James Buswell, and members of the Brentano, Manhattan and Ying Quartets.  Eugene Moye Jr., “one of the foremost cellists of his generation” according to the New York Times, is the principal cellist of Westchester Philharmonic, American Symphony Orchestra, American Composers Orchestra and Opera Orchestra of New York.  He both a sought-after member of various chamber groups, and has also recorded with or backed up nearly every popular music star, including Michael Jackson, Brittany Spears, Ricky Martin, Tony Bennett, Ray Charles, and Kiss.