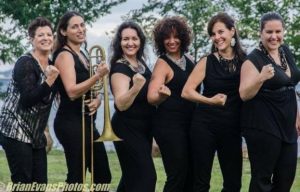 A virtual United Nations of women, the members of Cocomama hail from five countries on four continents. Playing their own kind of World Latin music, powerfully virtuosic yet elegantly musical, Cocomama creates a sound that is all at once fierce and beautiful!

Their debut album Quiero, included in the 2016 Grammy pre-nominations for Best Tropical Latin album, celebrates the coming together of a wide range of musical experiences in three different languages. As evidenced by their diverse repertoire, the group’s influences are limitless: Afro-Cuban, Classical, Jazz, Afro-Caribbean, Latin American, Soul, R&B and beyond.

Cocomama’s origins date back to 2005 when an all-female salsa band was requested to play a fundraiser at the Copacabana for then New York Mayor Michael Bloomberg. The success of this chance performance led to other engagements and Cocomama was born. Over time, the sheer diversity of the band members’ backgrounds and talents could not be ignored; today, the group’s sound is an inclusive blending of musical styles and influences from around the globe.

Enchanting audiences with their irresistible groove at New York City’s most popular jazz and Latin clubs including Studio 54, the Iridium, and Subrosa, Cocomama also has performed at the United Nations, the Brooklyn Academy of Music, Central Park, and the Metropolitan Museum of Art.