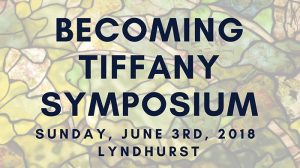 10:30 AM
Louis C. Tiffany: “A Young and Promising Artist”
Roberta A. Mayer, Ph.D., Professor Emerita, Art History, Bucks County Community College
Louis Comfort Tiffany, best known for his decorative glass, was also a life-long painter in oils and watercolors. He began his training during his teenage years in New York City. After the Civil War ended, he traveled to Europe for the first time. In 1867-68, he studied with a genre painter in Paris and then continued to develop his ideas based on further travels in Europe and North Africa in the 1870s. In addition to his well-known Orientalist compositions, Tiffany captured aspects of modern American life that may seem antithetical to his later role as a Gilded Age tastemaker, but which established his artistic reputation, including industrial scenes along the Hudson River, the slums of the Fourth Ward in Manhattan, and the mixed-race fishing community at Seabright, New Jersey.

11:30 AM
Louis C. Tiffany’s Designs for American Synagogues (1889-1898)
Dr. Patricia Pongracz
Louis C. Tiffany’s Designs for American Synagogues (1889-1898) focuses on some of the earliest of The Tiffany Glass and Decorating Company’s commissions for sacred buildings. Pongracz identifies and analyzes decorative programs made for American synagogues. She illustrates how these early Judaic designs influenced and informed and were informed by what became known as the firm’s innovative decorative style, which found full expression in The Tiffany Chapel displayed at the World’s Columbian Exposition in 1893.

12:30 PM  Lunch
A selection of sandwiches, salads, and snacks will be available for purchase to ticket holders at lunch. Pre-purchase lunch voucher with your symposium ticket to speed through the lunch line.

2:00 PM
McKim Mead and White’s NYU Library, Tiffany and Hellen Gould
Samuel White, AIA
The former NYU library in the Bronx, New York, is considered to be Stanford White’s most important building.  White’s grandson, also an architect, is in the process of leading an effort to restore this edifice, donated to NYU by Jay Gould’s eldest daughter Helen.  He will explore the relationship between the three powers that brought this building to fruition, White, Tiffany and Gould. Helen Gould attended law school at NYU, one of the few schools in the 19th century that allowed for the admission of women.

3:15 PM
Tiffany’s Early Works
Martin Eidelberg, Professor Emeritus, Rutgers University
The term “Tiffany lamp” brings to mind a jewel-like creation: a beautifully wrought bronze base supporting a shade with a design of poppies, wisteria blossoms, or peacock feathers, all created in leaded glass of rich, sonorous colors. But such lamps were not made until about 1900, after Tiffany had become the Tiffany we recognize today. What sort of lighting had he made a decade earlier? It was quite different but equally colorful and highly inventive.