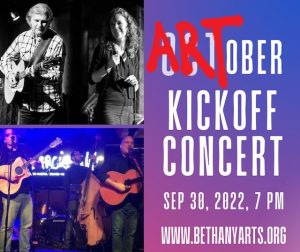 Friday Sep 30th, join us for a night of music to kick off our month-long celebration of the arts – “ARTober!”

Anne Carpenter
Anne Carpenter, a longtime resident of Ossining, has been singing professionally for local audiences for close to a decade now after spending most of her singing life as a choral singer and occasional solo performer. She and Peter Calo have enjoyed a 5-year musical partnership paying tribute to some of the great folk singers of our time. She still enjoys singing in the church choir and occasionally lending her backup vocals to some of her favorite musicians. Anne is also a photographer, selling her work locally at Hudson Valley Books for Humanity and here at Bethany Arts Community where she has found her artistic home as a studio artist and member of the Bethany family. Anne will be performing in November at Ossining’s Westchester Collaborative Theater (wctheater.org) as part of a “Living Music Event” combining live theater and music happening the weekends of November 11 & 18. You can visit her website at (AnneorAnnie.com) to see some of her work and find out where to connect with her on social media to find out where she’ll be performing next.

Cornbread Jam
is a Tarrytown, N.Y. -based acoustic trio (upright bass, two guitars/vocals) that plays Americana, blues, folk and rock. The band regularly performs and interprets the music of many influential artists, such as Ben Harper, Paul Simon, Jerry Garcia, Bob Dylan, Neil Young, Taj Mahal, The Band and The Grateful Dead, among countless others.

Cornbread Jam was formed with the goal of bringing fun, lively and intimate “living room jams” to venues far and wide. Gregg Annuziata and Brad King founded the band in 2013. The two guitarists/singers met in the early 1990s while attending the State University of New York at New Paltz. For many years they played house parties or around campfires — just for fun and the enjoyment of bringing people together through music. Roughly five years ago, a great upright bass player, Neil Jacobson, joined the band. Countless gigs later, their journey continues…