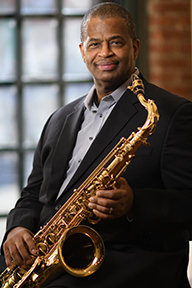 “Ray Blue has a majestic presence…when playing, his sense of purpose is obvious. It’s one thing to be a good composer, it’s another to be a great performer. Ray Blue’s got the whole package.” – Jean Szlamowicz, Jazz Hot, Down Beat

Ray Blue’s music can be described as a fusion of straight ahead jazz and rhythmic groove. Ray is a New York bred saxophonist, composer, arranger and educator who performs internationally.

He was also a cast member of the “Ray Charles Show” which toured in Germany, Switzerland, Austria and Italy 2008 to 2010.

After receiving a graduate degree from the University of Iowa, Ray returned to New York, got re-connected on the scene and studied at the Jazz Mobile with Charles Davis, Stanton Davis and later with Paul Jeffrey, Charlie Lagond, Sonny Sharrock and Barry Harris. Some of his mentors include Arthur Blythe, Houston Person, Ornette Coleman and Benny Powell.

PJS Jazz Society presents the best in jazz every Second Sunday at First Presbyterian Church, September through April. Most concerts start with a Young Musicians opening set from 5:15-6:00 pm, followed by two Headliner sets from 6:30-9:00 pm. Concerts are held in a cabaret setting. Additional parking available at the Holmes School (next to the First Presbyterian Church on Columbus Avenue).