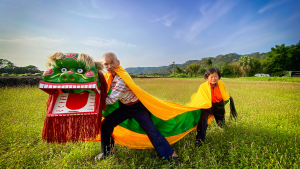 The Yonkers Film Festival (YoFiFest) is facilitating a space for people from all walks of life to sit in the dark together and share a collective experience. And it has been doing so for the past 10 years. Founded by Dave Steck and Patty Schumann, who are filmmakers themselves, YoFiFest began due to the lack of industry representation and accessibility for filmmakers in Westchester. Steck and Schumann sought out to create opportunities and serve a need for both the filmmaker and film fan, and did so by starting the non-commercial, non-profit organization.

Open to filmmakers all over the world, YoFiFest receives a diverse group of submissions every year; varying in subject matter, genre and language. This year, the festival will be presenting more than 140 independent films from 31 countries.

“We look for compelling stories that are well told,” Steck said. “We want to show films that our audience connects to – something that allows them to dream a little bigger.”

This year, the festival will run from December 2-11, offering not only film screenings, but also workshops, networking events, awards and receptions. While the films come from around the world, the festival puts a spotlight on local. Kicking off the event (12/2) will be the “Taste of Yonkers” red carpet reception, which offers food from local restaurants. The weekend events conclude with parties, during which filmmakers and film fans can connect and converse.

During the week, beginning on December 5, the festival offers themed programming each night, respectively: Around the Globe, Independent to the Core, Queer Screen, Ladies Night, Kid Screen, Viva la Cuba! and Friday Fright Night. The second weekend offers even more, including a “Locally Sourced” showcase, which features films that were made by local artists or were shot in the area.

One unique and accessible aspect of YoFiFest is its fully hybrid structure. Schumann says that following a hybrid model is beneficial for audiences who want to screen the films from their own homes, but moreover it allows all of the filmmakers to be a part of the Q&A, regardless of where they are located around the world: “The filmmaker talkbacks are one of the best parts of the film festival and this year almost every one of our filmmakers plan to attend their film’s Q&A.

Festival-goers are encouraged to participate in industry-related educational workshops. Catering to many interests and levels of experiences, the events offer a variety of lessons such as hands-on skills related to cameras and lighting, historical lectures and tips on how to pitch film ideas to industry experts.

YoFiFest is not driven by the ability to pack a theater, but rather by a passion for creating. The work doesn’t stop when the festival ends. YoFiFest is launching a new TEAM (Training for Employment for Arts and Media) program in the spring, which will offer training within the arts, specifically in film and theater. The application process will open during this year’s festival. Says Steck: “We’re not only training filmmakers in these programs, but we’re helping to improve where we live. I’m proud of the community members we’re making.”

Though the festival provides experiences for artists and enthusiasts, it also aims to reach an audience that might not otherwise be exposed to this craft. Steck explains: “Our movie screen is a giant window, and that window allows us to look into other people’s lives and experiences. Suddenly the unknown becomes known and ‘the other’ becomes familiar.”