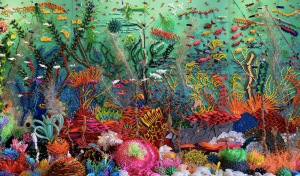 “My commitment is to beauty.”

“My work is about transmitting a feeling,

generating an emotion and causing a smile.”

“I keep calm by making art.”

The sentences above have been stuck in my head ever since I talked to Federico Uribe. Those are his words about his art and his reason for making art.

Plastic Reef, on view at Hudson River Museum (HRM), is a whimsical work of art that may also make its viewer horrified at the enormity of the plastic pollution problem that the piece exemplifies.

I asked the artist about the inspiration behind the installation. Learning about the Great Pacific Garbage Patch, a stretch of ocean between Hawaii and California that is littered with a high concentration of plastic waste, was where the idea first germinated.

Uribe was also captivated by scientists’ documentation of the coral bleaching, a process during which coral turns white due to various factors like increasing ocean temperatures, in the Great Barrier Reef off the coast of Australia.

It was years before he decided to build Plastic Reef, but when he finally did, he dove in obsessively. He started by collecting plastic from everywhere he could think. He also rallied together friends to participate: one friend who worked at a nursing home collected medication vials for him; an acquaintance who owned a children’s catering company donated the excess of brightly colored plastic utensils.

He built the entire colossal installation with his own two hands; no assistants. He toiled for a full year, assembling massive quantities of plastic objects into representations of the denizens of the Great Barrier Reef. Plastic Reef premiered at the Venice Biennale in 2019. The piece at HRM, which is 2,250 cubic feet, is only a portion of the full installation.

Interestingly, Uribe told me that he found plastic to be unpleasant to work with. When I pressed him to tell me why, he quipped: “there is nothing sensual about it. It’s a material not meant to seduce anyone by touch.” What a fine turn of phrase!

When I visited HRM, I was accompanied by Laura Vookles, chair of the museum’s curatorial department. She enthusiastically told me everything she knew about the art and the artist, but the phrase that stuck with me most was when she described something that the artist had said about using screws to hold together the different components. She referenced his phrasing: “the cathartic physicality of screwing through plastic.” Of course, artist to artist, I had to ask him about his choice of favorite construction methods. And yes, he loves to use screws and screw guns. Of course the tools vary depending on what kind of objects he is using for his latest creation. So he also loves industrial strength glue guns.

In terms of the materials he loves to work with – the ones he does think are sensual – and it turns out a love for fabric is a common love of ours. Uribe told me of an enormous wall piece called Day Watch, made from fine Italian silk ties, which he loved making a few years ago. He also referenced wood and books. In fact, he is currently building a forest from these materials for an installation in a science museum in Calgary, Canada.

We chatted for almost an hour, as I shamelessly quizzed him about his studio, work and home. For the record: he designs his own clothing, has designed a former home, speaks three languages (French, English and Spanish) and has a staggering work ethic – he works on his art twenty hours a day and six days a week.

I may just have to find my way to Calgary next year to wander around in his forest. But for the time being, you’ll find me in Westchester, lost in his plastic reef through February 12, 2023.