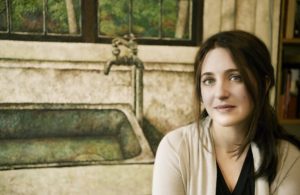 The Sanctuary Series celebrates spring with “spellbinding” pianist Simone Dinnerstein in a recital entitled “Gnossiennes” on Sunday afternoon, March 29 in the Sanctuary of the South Salem Presbyterian Church at 4 PM.  The recital will feature works by Couperin, Glass, Satie and Schumann followed by a post-concert reception.

Known for highly personal recital programs, The Washington Post has said of her unique talent: “Ultimately, it is Dinnerstein’s unreserved identification with every note she plays that makes her performance so spellbinding.”

2018 was a banner year for Dinnerstein, including a highly lauded recital at the Kennedy Center, her debut with the London Symphony Orchestra, a live recital for BBC’s Radio Three and an ambitious season as the first artist-in-residence for Music Worcester. She also toured Piano Concerto No.3, a piece that Philip Glass wrote for her. Recent highlights include a European tour with Kristjan Jarvi and the Baltic Sea Philharmonic and a residency in San Francisco with the New Century Chamber Orchestra.

Now in its seventh season, The Sanctuary Series remains committed to presenting “extraordinary keyboard recitals in the pastoral setting of northern Westchester’s historic South Salem Hamlet.” Upcoming concerts will feature two, young rising star pianists, Dominic Cheli on April 19 and Fei-Fei who will close the season with a special Mother’s Day performance on May 10 where the traditional post-concert reception will feature a Champagne toast.

South Salem Presbyterian Church is at 111 Spring Street, South Salem, NY, just 4 miles West of the fountain in Ridgefield CT. Tickets begin at $25 ($15 students) for general admission in advance and can be purchased on the Series website www.thesanctuaryseries.org.  For more information email  [email protected] or call 914 763 5402.