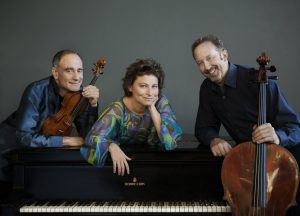 Sarah Lawrence College is delighted to announce that The Jean Wentworth Music Residency will bring the Weiss-Kaplan-Stumpf Trio to campus in April. Established by the Wentworth family in memory of revered concert pianist and music faculty member emerita Jean Wentworth, the residency invites musicians of distinction to campus to work with students in program areas of music and beyond, offering cross-disciplinary engagement and audience building.

The Trio’s visit will include two free public concerts – an afternoon concert on Tuesday, April 23, 1:30 p.m., and a Wednesday evening performance on April 24 at 7:15 p.m. The concerts will feature piano trios of Beethoven, Ravel, and American composer Paul Lansky, and short piano pieces from Yael Weiss’ 32 Bright Clouds project, including works by composers Malek Jandali (from Syria), Sidney Marquez Boquiren (the Philippines), George Mensah Essilfie (Ghana), Ananda Sukarlan (Indonesia) and the world premiere of Venezuelan composer Adina Izarra’s “Arietta for the 150,” which is dedicated to the 150 young people whose lives were taken during the 2017 peace demonstrations in Venezuela.

The Weiss-Kaplan-Stumpf Trio combines the talents of three award-winning soloists to bring its distinctive fusion of authority and experience, energy, and passion to each performance. Pianist Yael Weiss, violinist Mark Kaplan, and cellist Peter Stumpf comprise the ensemble and embrace the music of the future while offering fresh insights into three centuries of masterworks.

Hailed by The New York Times as “three strong voices, locked in sequence,” the Trio has presented concerts throughout the United States, Europe, and the Middle East, with multiple appearances at The Kennedy Center, Wigmore Hall, Baltimore’s Shriver Hall, Princeton, UCLA, Indiana and Oxford Universities, Tel-Aviv Museum, and for the Chamber Music Societies of Edinburgh, Santander, Pasadena, Phoenix, Cincinnati, Salt Lake City, and Tucson, among many others.

The Trio is well known to American radio audiences through nationwide broadcasts on shows such as APR’s Performance Today, WNYC’s SoundCheck, and through their critically acclaimed recordings for Bridge Records. The ensemble has recorded the complete set of Beethoven’s piano trios, which will be released on Bridge in honor of the Beethoven 250th anniversary in 2020.

Committed to new music, the Weiss-Kaplan-Stumpf Trio has commissioned many works, including Lera Auerbach’s “Triptych: The Mirror with Three Faces”, Clancy Newman’s “Juxt-Opposition”, and “Variations on a Poem” by Michael Hersch. In 2015, the trio gave the world premiere of Michael Gilbertson’s concerto for trio and orchestra, “Outliers”, and in 2018 recorded “Angles,” a new work written for them by noted composer Paul Lansky, which will be performed in the concert at Sarah Lawrence on April 23.

Both concerts are free and open to the public, but reservations are required. To reserve a space, please e-mail [email protected].