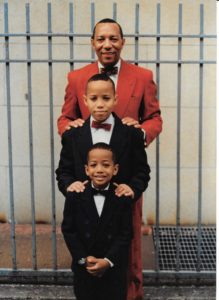 March 12, 2019 – Pleasantville, NY – The Gordon Parks Foundation today announced a solo exhibition of the work of documentary photographer Jamel Shabazz to be presented this spring at The Gordon Parks Foundation. Jamel Shabazz: Honor and Dignity will be installed at the Foundation’s exhibition space from April 5 through July 12, 2019 and is free and open to the public. The public artist reception is on Friday, April 5 from 6 to 8PM where the artist will provide a soundtrack of music that has inspired him and will also be available to sign books. On view during the opening of Honor and Dignity will be a group of Gordon Parks photographs selected by Shabazz.

“Our exhibition space is a platform for engaging the public with the work of Gordon Parks and those artists who carry on his legacy. We are so pleased to share Jamel’s remarkable work at the Foundation as part of this commitment,” said Peter W. Kunhardt, Jr., Executive Director of The Gordon Parks Foundation.

Shabazz lists Gordon Parks as one of his largest influences. Now recognized as the most important African-American photographer of the 20th century, Parks showed the face of American poverty with empathy and respect, using the arts to champion social change. Both Parks and Shabazz prioritize portraying their subjects with honor and dignity. Born and raised in Brooklyn, Shabazz began making photographs at the age of fifteen and used his camera to document his peers and their community. His mission was to extensively document various aspects of New York City street life and urban culture.

Of his work, Shabazz has said, “I’ve always felt a great degree of duty to engage young men and women about the obstacles of life and the need to prepare for the future.” In doing so, Shabazz bears witness to the evolution of his community with an overall goal to “contribute to the preservation of world history and culture.”

Both well-known and little-seen photographs are included in the exhibition, portraying people from all walks of life. Fashionable youth, service men and women, pride displayed through traditional garb, civil servants on the job, brotherhood and sisterhood in a variety of forms all showcase the distinctiveness of his community and Shabazz’s love for it. The exhibition’s introductory wall text has been written by Dr. Maurice Berger, Research Professor at the Center for Art, Design and Visual Culture, University of Maryland, Baltimore County.

Jamel Shabazz received the 2018 Gordon Parks Award for his commitment to the arts and use of creative means to carry on Parks’ ideas and goals and inspire the next generation. The Awards, as well as the Foundation’s exhibition program, are part of the Foundation’s year-round educational initiatives in the arts and humanities to advance Parks’ extraordinary vision and legacy of social change. These initiatives additionally include a scholarship and prize program and an annual fellowship program, which are made possible through the support of individuals, corporations, and grantmaking organizations.