The Walkabout Chorus was created by Pete Seeger to bring the environmental message of the Hudson River Sloop Clearwater inland where the boat can't sail. For the past quarter century the chorus has been performing songs about the environment, peace, and justice - keeping the old songs alive and teaching new ones - and always encouraging audiences to sing along. Walkabout has performed throughout the east coast and internationally and appears on Pete Seeger's Grammy-winning CD: Pete Seeger at 89. The chorus appeared in "Peter Yarrow's Singalong Special" on PBS and has released its own CD "They Had A Song". More at www.walkaboutclearwater.org. ata] 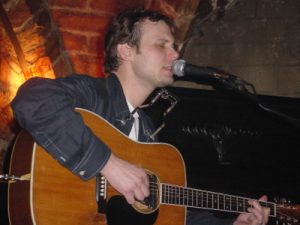 Alastair Moock wears many musical hats. He’s Boston’s Music Award nominated singer-songwriter. A GRAMMY nominated family music performer and a much beloved provider of school assemblies and residencies for students of all ages. Alastair is the recipient of the ASCAP Joe Raposo’s Children Music Award. The Boston Globe calls him, “one of the towns best and most adventurous songwriters”. Moock’s latest family album is a joyful, musical rallying cry for young (and old) leaders in these turbulent times. It looks to the heroes of our past and present to inspire our kids to move the ball forward. The album won a 2020 Parents’ Choice Gold Medal and Nora Guthrie (daughter of Woody Guthrie) said upon its release “How lucky we are to have Alastair Moock around these days! When too many adults are role modeling the pursuit of fame, fortune, or personal gain, Alastair’s songs encourage our kids to pursue goodness, kindness, awareness and courage. Adults might listen up!”

No press releases written yet.