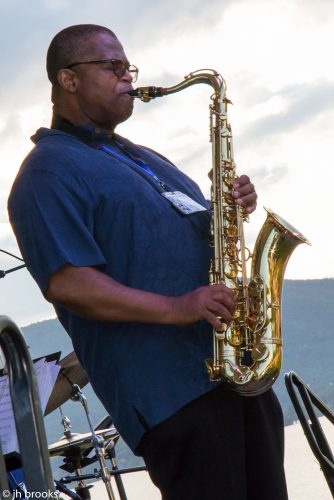 Saxophonist Ray Blue has a unique sound and style that are energetic, inspiring and sensitive. Ray has been performing for many years touring the U.S.A., Europe, China and Africa. Along with this he conducts workshops and clinics.

Ray was born in 1950 in Portsmouth, Virginia and raised in Peekskill, New York.  He was drawn to the music of Miles Davis and others but specifically to the tenor saxophone sounds of Stanley Turrentine, Gene Ammons, Ben Webster, John Coltrane, Jr. Walker and King Curtis. As a teenager he played in the school jazz band and an R&B/soul band where he learned a deep appreciation for the blues form. Ray earned a Bachelor’s degree from William Penn University and a Masters from the University of Iowa in Clinical Social Work, where he developed a deep interest in society and social psychology.