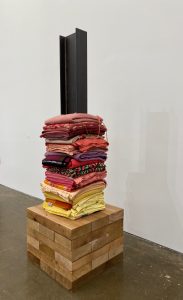 New additions to How We Live: HVMOCA’s ongoing exhibition:

Watt is an artist and citizen of the Seneca Nation with German Scottish ancestry, which informs her work and process deeply. Her layered points of influence are reflected in her artwork, particularly text elements featuring language pulled from and discussing Indigenous knowledge and Iroquois proto-feminism, the matriarchal structures of certain Native American tribes, the rise of social activism throughout the 20th century, and the anti-war and anti-hate content of 1960s and 1970s music- such as the Marvin Gaye song, “What’s Going On.” Messages of both longing and hope from the past that still resonate today.

Like Josef Beuys and Wolfgang Laib, her specific choices of materials culled from the everyday are deep with meaning. Watt’s symbolic use of textiles is a central tenet of her work. Whether a shirt or a blanket, these are the items that protect us against cold and external dangers. We wrap ourselves in it like a second skin. Textiles consistently play a role in Watts’ works, but especially in Blanket Stories she deals with them in a special way.

Watt’s work has been on view in 2020 at: The Whitney Museum in the exhibition Making Knowing: Craft in Art, 1950–2019, the Yale University Art Gallery in Place, Nations, Generations, Beings: 200 Years of Indigenous North American Art, the Renwick Gallery of the Smithsonian American Art Museum in Hearts of Our People: Native Women Artists.

Martinat (b. 1974, Lima, Peru) lives and works in Lima, Peru. Martinat’s work is concerned with the social, cultural, and political contexts of Latin America. He has a multidisciplinary practice that involves painting, sculpture, audio, appropriation, and text. In his signature work Martinat sources graffiti from walls and surfaces throughout South America. He’s developed a technique to extract layers of paint that is then peeled away maintaining the grittiness of the wall with its imagery. He appropriates logos, letters and phrases that capture the political tension of the populace. These “paintings” have a new life on the white walls of galleries, museums, and private collections. They are at once beautiful and unusual objects while keeping the emotional tension of the source.

Moris, Mexican, born 1962
His work addresses representation, social and subjective agency, urban issues, and marginal cultures often taken for granted in mainstream society. Moris grew up and continues to live and work in a Cartel-run area outside Mexico City. The focus of Moris’ research is an intrinsic part of his daily life; the street and social space are his laboratory. Understanding the diverse social codes of the urban underclass and underworld, their strategies for survival, and informal use of aesthetics to make daily life more humane and dignified are the driving ethos for his work.

His recent work echoes the phenomenology of the migrant, the survival tools in the countries, on the long journey to the USA. Always looking north, Latin Americans whose nationalities are increasingly more linked to the south, compose a great unstoppable caravan transforming each place on the way towards to the US.

Among the issues to be faced are labor, public health and housing. Under the idealization that the north has more resources and better payments, the obtained elements on the momentary residence will never be enough. However, migrants try to obtain the benefits that a government as the US may offer. There is an ongoing tension between the government and the caravan seeking opportunities and resources during their stay or possible permanent residence. Moris’ work is part of many important public and private collections worldwide including the Museum of Modern Art (MoMA), New York City, Museum of Contemporary Art (MoCA), Los Angeles, La Colección Jumex, Mexico City, and FEMSA Collection, Monterrey Mexico.

Solo/Duo–with Jo- Ann Brody, sculptor, and Liz Ndoye, mixed media/fiber artist. Both are figurative artists whose approaches are unique to their individual concepts; Brody focuses on form and stance while Ndoye  captures the fictional cultural milieu of her dolls.

Donna Barkman, actress and playwright who has worked with Mara Mills for many years. On original work. For several years, Mills, Barkman, and Brody have collaborated on presentations for Ceres exhibitions.

Perfect Mind aka Thunder Perfect Mind, from the Nag Hammadi texts, is in the voice of a woman who is all and its opposites, “fertile and barren; the mother of my father and sister of my husband.” Written circa 400 AD, she may be an Egyptian goddess (Isis has been mentioned) or one of the Gnostic godheads. She may be all female or androgynous. What we do know is that she goes beyond the limits of gender restriction and role and speaks truth to power or is the power.