From The Streets, curated by Marc Leader of 212 Arts and Melissa McCaig-Welles of Curator 19.90, chronicles the meteoric rise of the urban artist from vandal and outlaw to cultural trendsetter. The exhibition features murals, paintings, photography, sculpture and installations from artists at the cutting edge of their discipline.

The ground floor of ArtsWestchester’s gallery will highlight legendary artists who rose to prominence in the 1980’s, a pivotal moment in graffiti’s burgeoning culture. It was this era where a spirit of competition fostered innovation and birthed a unique mode of artistic expression. “From the Streets” tracks these artists’ continued influence on urban visual culture and examines the shift from the streets to the gallery and museum. Artists exhibited on the gallery’s second floor are internationally recognized for creating provocative work informed by the attitude and style of street art’s pioneers.

From The Streets exemplifies the scope and evolution of a subculture that has become a global movement. To accompany the exhibition, ArtsWestchester will present a series of film screenings and music happenings that position the artwork within a broader cultural context.

Docent-led tours of From the Streets are available by appointment through July 15. Contact Kim McKoy at 914.428.4220 or [email protected] to book your tour today. Tours are scheduled Tuesdays – Saturdays in ArtsWestchester’s Gallery.

This exhibition is made possible in part with support from:

Events Associated with “From the Streets: An Exhibition of Urban Art”

“Saving Banksy” is the story of one misguided art collector’s attempts to save a Banksy painting from destruction and the auction block. Featuring some of the world’s top street artists, this film poses the question “What would you do if you owned a million dollar painting that the artist doesn’t want sold?”

Say farewell to ArtsWestchester’s blockbuster exhibition, “From the Streets” as you mix, mingle, and enjoy performances by local rising musical talent.  Presented in partnership with Visionary Social Club and Doses Management.

Narrated by John waters and directed by Roger Gastman, ‘Wall-Writers’ is a feature-length documentary on graffiti in its innocence, focusing on the legendary writers of 1967 – 1972. Graffiti and street art today are largely considered the rock n’ roll of visual art. This documentary is an exclusive account from the artists, journalists, and politicians who lived the beginnings of the largest art movement of the Twentieth Century.

Join us at Bloomingdale’s White Plains for a day of urban fashion and music. ArtsWestchester will host a pop-up shop of hand-embellished t-shirts inspired by the exhibition and a set of hip-hop dance performances. A portion of sales made that day will go to benefit ArtsWestchester’s Arts-in-Education programs which provide students in under-served communities with arts experiences.

Go behind the scenes with legendary muralists and graffiti artists, TATS CRU. A viewing of the acclaimed feature documentary “TATS CRU: THE MURAL KINGS”, exhibiting TATS CRU artists (BIO, BG183, and NICER) will join Director Mark Kotlinki for a Q&A.

Join us for a night of performance and storytelling with songwriter, MC, and DJ, Curtis “Grandmaster Caz” Brown — an icon of early hip hop as a member of the Cold Crush Brothers. Caz will be accompanied by Grand Wizzard Theodore, the DJ credited with the “scratching” technique.

Throughout the history of hip-hop, female performers and artists have pushed the boundaries and stereotypes of the art form to prove it isn’t just a man’s world. The Women of Hip-Hop will feature a lesson in party dances from “back in the day,” a panel discussion with graffiti artists and b-girls, followed by a DJ and dance performance. 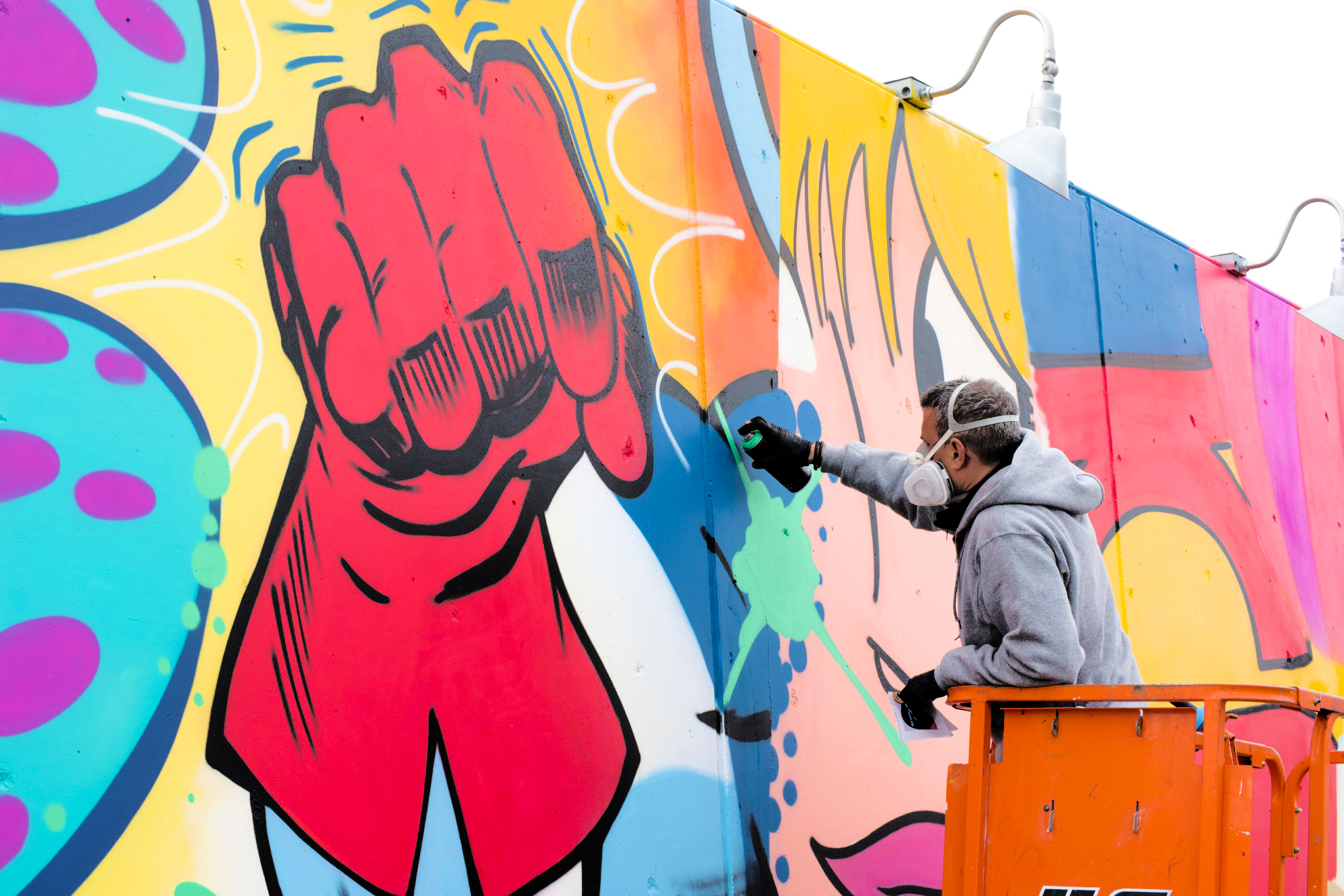 Artist Crash at work on a public mural