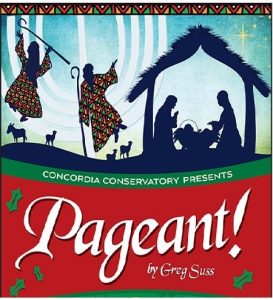 Open auditions for performers ages 8 –18 for the stage production of “Pageant!” will be held on Friday, September 24 (3 – 6pm) and Saturday, September 25 (9am – 12pm) at Concordia Conservatory in Stein Hall. Reservation is required for exact audition time.

“Pageant!” with book and lyrics by Greg Suss, is a story about how a traditional Christmas Pageant changes and brings the community together.

Rehearsals for “Pageant!” will be held Tuesday afternoons and Saturday mornings until the production week. Starting November 29, rehearsals will be held for the entire cast every afternoon from 4 – 6:30 pm.

The musical will be performed December 4-5 in the Bronxville High School Auditorium.

Auditioners are required to sing a solo song of their choice which best demonstrates their vocal ability and must bring their own sheet music. An accompanist will be provided. All auditioners will be asked to dance and be prepared to read a selection from the script.

Since 1999, Concordia Conservatory has produced an annual holiday musical as a tuition-free community outreach program funded by private contributions from donors throughout Westchester and Fairfield counties.

Concordia Conservatory’s mission is to inspire, instruct, and enrich lives through music offering excellence in education and performance.