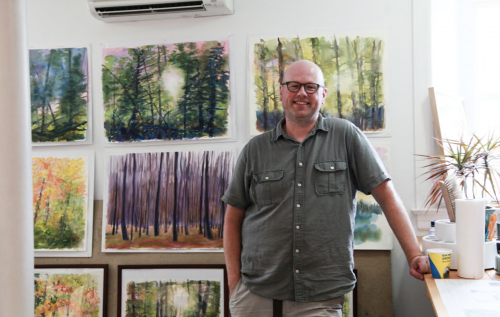 After a three-year break due to the COVID-19 pandemic, Peekskill Open Studios is back for its 23rd year. The two-day event will feature works from more than 100 artists in a variety of settings in and around downtown Peekskill – open studios, galleries, special exhibition spaces and pop-up shows – letting visitors reconnect with art in many forms after a long absence.

Painting, pottery, sculpture, jewelry, photography, film and multimedia work will all be on display at the event, which is hosted by the Peekskill Arts Alliance (PAA) on June 4-5. Visitors can go to the Gazebo on Division and Park Streets to pick up a catalog with information about participating artists and a map that highlights all of the Open Studios attractions.

More than 20 artists will open their studio doors, giving visitors the chance to see works in progress. Other highlights include the PAA Tent Site Gallery, and Off the Beaten Track, a group show at Westchester Community College (WCC) on Division Street. Studio Theater in Exile will present a video performance with a multimedia component at Hudson Valley MOCA.

“We are thrilled to open the studios again,” says PAA President Robin Kline, who is also a potter herself.  “Peekskill is always vibrant, but it will be especially vibrant during Open Studios. There is such a range of artistic talent here and it’s great for the public to meet our members.” Kline’s work will be on display at the Tent Site Gallery.

During the pandemic, the members of the PAA hosted monthly Zoom meetings, in which they showed their work, but Kline says there’s nothing better than seeing art in person.

Participating galleries include The Flat Iron Gallery, The Third Eye Gallery, The Artist Spot, Peekskill Artists’ Co-Op, and The Artist Lofts on Main. There will also be exhibits at PranaMoon Yoga, located in the Hat Factory just outside the downtown area, and Peekskill Clay Studios.

“This is my second time participating in Open Studios,” says Monique Brideau, an abstract painter and collage artist who works in The Lofts on Main Street (#303): “It’s the best way to speak directly to artists and to get a sense of the artistic process.

Mirroring Kline’s sentiment, Brideau adds: “These days we are so accustomed to looking at images online, but nothing compares to seeing a work of art in person.”

Open Studios newcomer Shanikah Bennett, known as Nikah Benne, says she is honored to be participating in the event for the first time. Her work will be on display in WCC’s Off the Beaten Track. Benne, a painter who works in acrylics and watercolor, says that she is looking forward to “put[ting] herself out there.” She adds: “I’m excited to hear feedback and I hope many of my African American people can see themselves in my work.”

Another newcomer, V.L. Cox, is an Arkansas native who recently relocated to Peekskill. Cox’s recent work has been highly focused on social justice and civil rights projects. Her exhibit, End Hate Doors, will be on display in the Jeannette R. Phillips Atrium on 1037 Main Street. “My goal in this series is to engage viewers responsibly in a dialogue, no matter how uncomfortable,” says Cox.

Jo-Ann Brody, an artist who works in clay, cement and, most recently, papier-mâché, will be exhibiting her figurative sculptures at the Tent Site Gallery. Brody explains that she has been involved with the Peekskill art scene and Open Studios for many years: “The Peekskill art scene gave me the strength, support and energy to develop into the artist I wanted to be.”