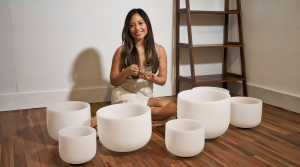 When Rebecca Mills was listening to the song Ultralight Beam by Kanye West, the lyrics “this is a God dream,” she says, flowed through her mind on repeat. The curator had wanted to create an exhibition about spirituality and transcendentalism. After listening to the song nonstop, Pelham Art Center (PAC)’s new exhibition came together in her head, and then in the gallery space.

Ultralight Beam, on view from September 15 through October 30, “explores transcendent themes of higher consciousness, enlightenment and the Universe as a whole,” Mills explains. She also says the show’s messaging is important at any time, but especially now, as it sets a standard for peace: “Being in the U.S., we have a lot of privileges… so we can be like, ‘Okay we’re all on this planet together. If we can accumulate peace here, then maybe we can set an example for people elsewhere.’”

The 10 exhibiting artists each explore aspects of human belief – spirituality, religion and the power of the universe. Some works are heavily immersed in transcendentalist theory; others can serve as more of a beginner’s course for those who are less familiar with the show’s themes. The artists all “take metaphysical and transcendental topics and put them into their works in a way where you can relate to it no matter what.”

When Mills first spoke with abstract expressionist painter Claire Buckley, the artist revealed that she isn’t much of a spiritual or religious person. But Mills told her that Wassily Kandinsky didn’t explicitly say that his work was about God; he was thinking about “the transcendental nature of emotions.” Similarly, Mark Rothko’s works “give this very spiritual, emotional experience because of how you react to its color.” It was then that Buckley understood the connection between her work and the core of this exhibition.

Mills likens Buckley’s work to the colors on a wall when you shine light on crystal. “You don’t have to know anything about art; you can just appreciate it, and the emotion itself is enough.”

The curator describes the work of Gabriel Mills as if one were looking down at terrain from the International Space Station: it may look like a mountain range or a stream of water, but from so far away it also looks abstract. Other Ultralight Beam artists address religious mysticism, deconstructing gender, and the cosmos. Themes are expressed in sculptures, shadow work, surrealist landscapes, abstraction and more.

Says PAC Communications Manager Michelle Costanza: “I think metaphysical and spiritual themes can be a turn-off for [some] people…This can be a shift in how they experience this sort of thing….It’s intended to be a light, cultivating experience.” The show’s goal isn’t for people to just see what’s in the gallery; it begs to saturate visitors with the theme of transcendence.

Gallery events aim to “connect people with the show in a different way.” In addition to a Santeria Batá drum circle on September 18, a Cacao Ceremony and Sound Bath by Sage Cacao will be offered on October 9. Costanza explains that the ceremony, which includes drinking traditional Cacao tea, laying down, and being consumed by the sound frequencies that fill the room, is a personal experience that “takes over your whole body, your whole mind.”

The most cherished aspect of Ultralight Beam for Mills and Costanza is that every visitor can connect with a piece, even if they aren’t familiar with the themes it presents. Mills explains: “I don’t expect this exhibit to change the world… [I want visitors] to have a meaningful takeaway, and hopefully put themselves in this place where they want to think more about universal peace.”