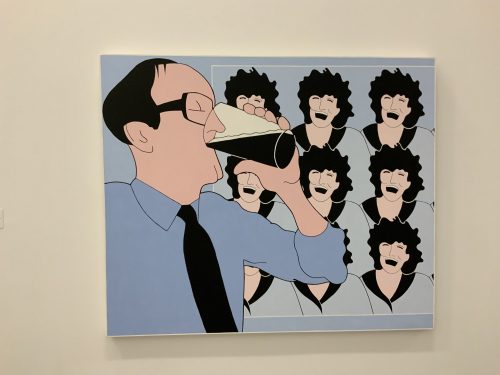 Hudson Valley MOCA (HV MOCA) is reopening its doors after a year of virtual programming. The museum, located in Peekskill and cofounded by Livia and Marc Straus, is widely known for its bold pieces that challenge and deepen its visitors’ understanding of life and contemporary art. This new exhibition is no exception.

How We Live: Part II is an expansion of How We Live: Sculpture and Video From the Marc and Livia Straus Family Collection, which was cut short due to the COVID-19 pandemic.

Most of the original sculptures from How We Live are still on display, joined now by a selection of new two-dimensional pieces.

In her online video tour, Straus explains that while the sculptural works refer to how we lived pre-pandemic; the two-dimensional works refer to how we are living now. The works refer, she says, “to the different strictures that we faced, our uses of technology, the need we had to be part of community, and the isolation within community.” But they are not just about the pandemic itself. They are a reflection

of the past year in its entirety: the political upheavals, the moments of joy and levity, and the violence and turmoil in our country and abroad.

The new works on display range from 1989 to 2020. The artists are Mexican,
German, Choctaw-Cherokee, Czech, Romanian, Hungarian, Canadian and American. There are landscapes, portraits, mixed media and collage. There is acrylic and oil, and also an elk hide, knives, boxing gloves, rabbit skin glue and raw honey on linen.

Near the entrance is Sven Kroner’s large-scale landscape painting Light Pollution, which hints at long dark winters as well as loneliness, desolation and environmental destruction. Humans are there, but not there. The air is ghostly. “I think it’s always been about isolation,” Jo-Ann Brody, HV MOCA’s Communications Coordinator, said of the painting. “But it resonates in a new way now.”

A.A. Bronson’s White Flag #8 resonates in a new way, too. Though it is a 9/11 tribute, a reminder of the AIDS epidemic and a nod to artist Jasper Johns, the whitened American flag may also bring to mind the current violence against people of color, the whitewashing of historical pain and a national mourning for those who have been erased. 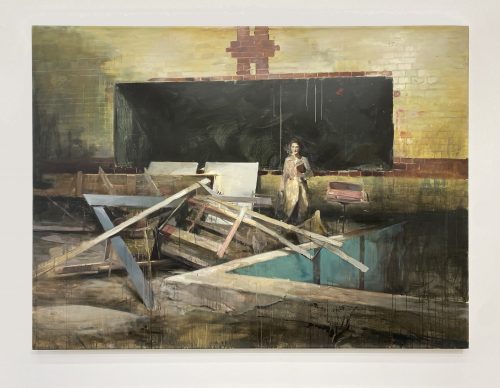 The most recently made work on display, MORIS’s El dueno de todo, is a mixed-media collage that draws on the history of art as well as the artist’s personal experiences living and working in a Cartel-run area outside of Mexico City. Objects found in his community hang from the bottom of the canvas—weapons, tools, ways out and ways up.

This summer, HV MOCA will present Writing Off the Walls: Creativity in the Time of Covid, a collaboration with Studio Theater in Exile. Poets and writers were invited to contribute original works that are inspired by the art in How We Live: Part II. Accepted pieces will be framed and hung next to the artwork in late July as well as posted in an online catalogue.

“How We Live: Part II” is on view both in-person and via a video tour of the exhibition led by Livia Straus through January 31, 2022.