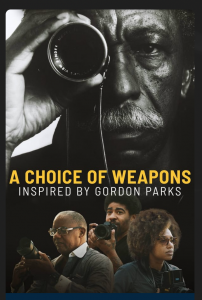 Legendary photographer Gordon Parks believed that photography was both an art form and a weapon for change. A deeply moving meditation on race, A Choice of Weapons: Inspired by Gordon Parks (an HBO documentary), shows how one person can have a ripple effect on the generations that follow as it explores the power of images in advancing racial, economic and social equality. Seen through the power of his lens, we see why Parks is a titan in the American photography canon. The film seamlessly blending Parks’ voice with those of the modern day photographers who carry on his legacy.

Immediately after “A Choice of Weapons,” there will be a panel discussion about Art & Activism led by the Westchester Youth Alliance and the Kunhardt Film Foundation. The film and panel discussion will be accompanied by “Youth Art & Activism: Inspired by Gordon Parks,” a Westchester Youth Alliance photography exhibition in the lobby of the Playhouse theater. Film for this screening is provided by Kunhardt Film Foundation.

“A Choice of Weapons” is named after Parks’ own autobiography, in which he detailed his upbringing in Kansas, where he found himself having to be “a different person” when in the presence of whites, a predicament he captured in his groundbreaking 1969 directorial feature debut, “The Learning Tree.” Encouraged by his mother to find a safer place to live, he toured the country, taking photos and capturing American life, while working as a waiter in the dining car of the Northern Pacific Railroad.

Previous post:
« The Story of Plastic, a Seething Expose, Presented by Bedford Playhouse
Next post:
Broadway Behind the Curtain presents Fran Weissler »